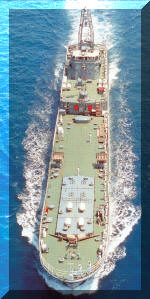 Complement: Design complement - 5 Officers, 16 Petty Officers and 24 Ratings. In regular practice, it is normal to have 6 Officers and 60 Sailors.

Weapons: Two AK-230 (twin) 30mm gun mountings with a single MR-104 (Drum Tilt) radar at H/I-band frequency. Some vessels have this particular radar removed and the guns are instead controlled by the Kolonka optical sight.

Helicopters: One helicopter platform (in Type 773IM) for the HAL Chetak helicopter.

Comments: These vessels are built by Poland's Stocznia Marynarki Wojennej or Naval Shipyard Gdynia in two batches of four on direct order from the Indian Navy. The vessels were commissioned in Gdynia, Poland and sailed for India with Indian crews. The commissioning CO of the Ghorpad, Sushil Kumar, was later to become the Chief of Naval Staff. The first four are Type 773I (I for India) and the second batch, with helicopter decks, are designated as the Type 773IM (M for modified). The first three vessels of the Type 773I series have been decommissioned. The first batch commissioned as the 4th Landing Ship Squadron based at Vizag, while the second batch constitutes the 5th Landing Ship Squadron of the Andaman Flotilla at Port Blair. It was announced in mid-2002 that Kirloskar Oil Engines Limited (KOEL) is to re-engine the four Type 773IM LST(M) with license built SEMT-Pielstick 6PA6 L280 engines with Naval Shipyard Gdynia acting as technical consultant. Other details have not been released.

Vice Admiral Raman Prem Suthan, Flag Officer Commanding-in-Chief Eastern Naval Command, stated that the Ghorpad had served for 9,000 hours at sea covering a total distance of 166,000 nautical miles during its 33 years of service. Lieutenant Commander Anil K. Tomer, who served as the last Commanding Officer of the Ghorpad, described her as the 'grand old lady' who has great accomplishments to her credit. Even during her last days, she was fighting fit. Commander M.V. Raj Krishna, who had commanded the ship between May 2005 and June 2006, described the decommissioning as a nostalgic moment.