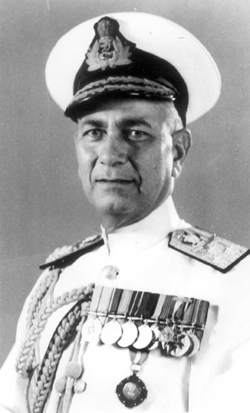 Admiral Sourendra Nath Kohli assumed charge of the Indian Navy, as the 7th Chief of Naval Staff, on 28 February 1973. Prior to this appointment, he was was the Flag Officer Commanding-in-Chief of the Western Naval Command, the largest command in the Indian Navy.

Born on 21 June 1916, Admiral Kohli was educated at St. Stephen’s College, Delhi. He then joined the Royal Indian Navy as a cadet in May 1936 and proceeded to the United Kingdom for training. Two years later he was commissioned as a Sub Lieutenant into the Royal Indian Navy on 25 June 1938. He qualified as a Communication Specialist in the United Kingdom in 1943. During the Second World War, Admiral Kohli saw action in the Persian Gulf and also in the Far Eastern theatre.

After Independence, Admiral Kohli was one of those specially chosen to head the expanding Indian fleet. He was deputed to the United Kingdom in December 1948 in connection with acquisition of destroyers and was appointed as the Commanding Officer of INS Rana, an Admiralty Class destroyer, when the ship was taken over from Royal Navy. Among the important appointments held by him since then are the senior officer of INS Godavari, a Hunt Class escort frigate and later the Commanding Officer of INS Mysore, a Crown Colony/Fiji Class cruiser. 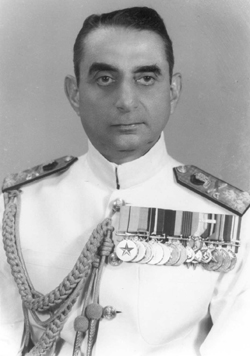 Admiral Jal Cursetji assumed charge of the Indian Navy, as the 8th Chief of Naval Staff, on 28 February 1976. Born on 20 May 1919, he joined the Royal Indian Navy as a cadet in January 1938 and was commissioned in September 1940. He served on board various naval ships during the war and was in command of INS Bombay in 1944.

Specialising in hydrography, Admiral Cursetji commanded naval survey ships for a number of years. He was the Surveyor-in-Charge, Marine Survey of India from 1950-54 and in 1955, he became the first Indian Chief Hydrographer to the Government, an appointment he held for more than two years.

Admiral Cursetji's other important appointments were Naval Attaché in Washington and commanding aircraft carrier, INS Vikrant. Promoted to the rank of Rear Admiral, in December 1967, he took over as the Chief of Personnel at Naval HQ. In February 1970 he was appointed as the Vice Chief of the Naval Staff (VCNS) in the rank of Vice Admiral. 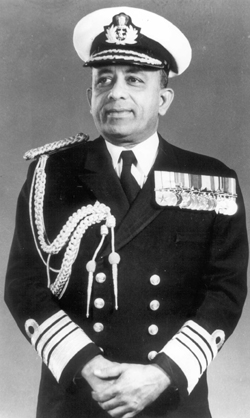 Admiral Oscar Stanley Dawson assumed charge of the Indian Navy, as the 10th Chief of Naval Staff, on 28 February 1982. Born in Burma, he also had his high school education there. When the Japanese occupied Burma in March 1942, he shifted to India where he continued his studies.

Commissioned in the Royal Indian Naval Volunteer Reserve (RINVR) on 07 January 1943, Admiral Dawson was subsequently thereafter absorbed in the regular cadre of the Royal Indian Navy (RIN). Even as a junior officer his career was marked with distinction and the sea has always been his first love. He participated in World War II in the Arakan Operations (Burma), on convoy escort duty in the Bay of Bengal and the Arabian Sea and in mine-sweeping operations soon after the war.

Trained as a specialist in Navigation & Direction in the United Kingdom, Admiral Dawson has held various afloat and ashore appointments. He served as the Naval ADC to President Dr. Rajendra Prasad, from 1953-54 and since 02 March 1981 is the Honorary Naval ADC to the President.

Subsequent to his graduation from the Defence Services Staff College in 1957, Admiral Dawson served as the navigating officer of the aircraft carrier, INS Vikrant and also as the Fleet Navigating Officer. Later, he held appointments of Officer-in-Charge, Navigation & Direction School and that of the Director, Tactical School and Chief Staff Officer at Cochin. 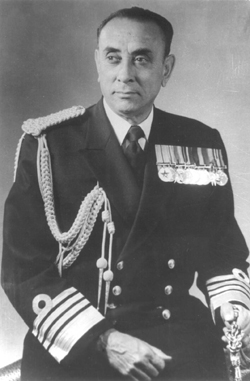 Admiral Ronald Lynsdale Pereira assumed charge of the Indian Navy, as the 9th Chief of Naval Staff, on 28 February 1979. Born on 25 May 1923, he was commissioned into the Indian Navy on 25 May 1943. During World War II, he saw active service aboard gunboats in Burma and Malaysia between 1943-45 and thereafter, continued at sea with an amphibious task group based in Iraq, till 1946.

After Independence in 1947, Admiral Pereira served for several years as a Gunnery Specialist, both afloat and ashore, before taking over as Officer-in-Charge of the Gunnery School, Cochin in 1956. A graduate of the Defence Services Staff College, he has served as Deputy Commandant of the National Defence Academy in Pune and as the Director of Combat Policy & Tactics at Naval HQ. He commanded the Indian Navy's Flag Ship, INS Delhi and commanded an anti-submarine warfare frigate, INS Khutar. He is considered as one the architects of the modern Indian Navy. 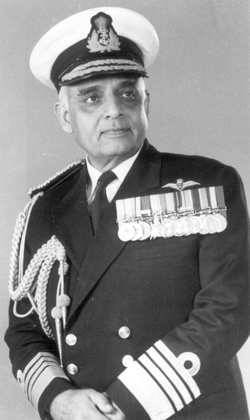 Admiral Radhakrishna Hariram Tahiliani assumed charge of the Indian Navy, as the 11th Chief of Naval Staff, on 30 November 1984. Born on 12 May 1930, he was commissioned into the Indian Navy's naval aviation branch on 01 September 1950. A qualified test pilot, his major commands at sea include INS Trishul and aircraft carrier, INS Vikrant.

On elevation to the rank of Rear Admiral in December 1977, Admiral Tahiliani assumed charge of Flag Officer Goa Area and later as Flag Officer Commanding Western Fleet (FOCWF). Subsequently, he served in Naval HQ as Assistant Chief of Naval Staff (ACNS) and Deputy Chief of Naval Staff (DCNS) and was the first incumbent when the latter post was elevated to that of a Vice Admiral.

Admiral Tahiliani has the rare distinction of having been the Flag Officer Commanding-in-Chief of two Naval Commands. He is a graduate of the Naval War College, USA and the National Defence College, New Delhi. He is a recipient of the Param Vashisht Seva Medal (PVSM) and Ati Vishisht Seva Medal (AVSM) for his distinguished service. He retired on 30 November 1987, after completing nearly 37 years of service.