Armament: The Naval Dhruv has cabin side pylons for torpedoes, depth charges or anti-ship missiles.

Design Features: The Dhruv features a 'System Bolkow' four-blade hingeless main rotor with carbon fibre composite blades. The blades have advanced  aero foils, swept back tips for reduced nose, and feature a ballistic tolerance against bullet hits of up to 12.7mm calibre. The fibre elastoner rotor head holds the blade between a pair of CFRP star-plates, with manual blade folding and a rotor brake provided as standard equipment. A four blade bearing-less crossbeam tail rotor is fitted on the starboard side of the pylon. Vibration damping is provided by an anti-resonance isolation system compromising four isolator elements between the fuselage and the main gearbox.

The military variants include crashworthy fuel tanks, frangible couplings and infra-red suppressors for the engines. The helicopter design enables the crew to survive vertical impacts of up to 30 feet per second, due to the safety seats and a design of controlled deformation of fuselage crumple zones. The cabin was designed to seat 12 people, however 14 can be accommodated in a high-density configuration. Rearward-sliding passenger doors are featured on either end, with large clamshell doors at the rear of the cabin. The clamshell doors can be removed, in exceptional cases, to carry unusual & unwieldy loads. An underslung load hook is standard on military variants. The air ambulance variant enables the Dhruv to accommodate two to four stretchers, with a couple of attendants.

The radar has been developed using special techniques with the frequency agility and coherent processing to detect targets under sea clutter. Advanced algorithms provide reliable performance under jamming conditions. The radar is built to perform two roles: a primary and a secondary role. Under the primary role, the radar performs sea surface surveillance for ships, vessels, submarines and air space for low and high altitude flying air targets. It supports navigation, weather characterisation and beacon functions as secondary roles. After a rigorous testing process, the radar has been accepted by the Indian Navy, however some fine tuning will be conducted before production begins.

The naval variant will also feature the Mihir sonar (dipping configuration) developed by DRDO's Naval Physical Oceanographic Laboratory (NPOL) in collaboration with the Indian Navy's Weapons & Electronic System Engineering Establishment (WESEE). The system is currently undergoing demonstration trials and production will take place at Bharat Electronics Limited (BEL). A forward looking infra-red (FLIR) turret will be fitted on the naval variant and the system will likely come from either France or Israel. Other features in the naval variant include a loud hailer, troop seats and a life raft among others for various mission requirements.

A communication radio (U/UHF, HF/SSB and standby UHF modes), IFF & intercom, with a Doppler navigation system, TAS system, radio altimeter and ADF are standard in all variants. A weather radar and the Omega navigation system is optional on the naval variant.

Engine: The Dhruv was originally powered by a pair of TM333-2B turbo shafts developing 746 kW (1000 shp) from Turbomeca of France. This was later switched to the LHTEC CTS800-4N turbo shaft (from the then Allied Signal of USA - now Honeywell) developing 970 kW (1300 shp). The more powerful CTS800-54 turbo shaft developing 1235 kW (1656 hp) was offered as an option. However these engines were embargoed by the US, for imposing sanctions on India for her nuclear tests in May 1998.

Connections were re-established with Turbomeca and the TM333-2B2 engine was selected, developing 825 kW (1100 shp) at take-off, with growth potential to 900 kW (1200 shp) for subsequent versions and features full authority digital electronic control (FADEC). AIN Online reported in February 2004 that Turbomeca will supply 318 TM333-2B2 engines to HAL for the series production. The journal also stated that Turbomeca has agreed to increase the offsets associated with this deal by transferring more work to HAL, which will now produce the engine's turbocharger and other accessories, including the fuel systems. HAL will also be securing repair licenses for the engines.

The Indian Army tested the Dhruv in the 1999 Kargil war against Pakistan. While the advantages in hot-and-high performance parameters and altitude limitations were obvious when compared to the HAL Cheetah, the Army wanted more out of the TM333-2B2 engine. Thus a Memorandum of Understanding (MoU) was signed on 12 September 2000 between HAL and Turbomeca to develop a turbo shaft more powerful than the TM333-2B2 engine. Called Shakti in India and Ardiden 1H in France, the engine is expected to develop 900 kW (1200 shp). The engine is set to complete its first test bed run only in mid-2005.

Around 300 to 350 Shakti/Ardiden-1H engines, worth $400 to $500 million in total, are expected to be produced at Bangalore under the deal. The first engines will not be ready before 2006 and will replace the existing TM33-2B2 engines on the production line. The engine will eventually be the standard power plant on the Dhruv and earlier production examples that entered service with the TM333-2B2 engine, will be retrofitted with the new engine. HAL has a 11% stake in the overall program and Indian engineers are based at Turbomeca's headquarters at Bordes in the southwest of France to assist with the development.

Comments: From July 1984, work at HAL was supported by MBB of Germany (now Eurocopter Deutschland) to develop a helicopter for military and civilian uses in India. On 18 March 2002, the Coast Guard became the first military service to induct the HAL Dhruv (CG-851) at a ceremony in Bangalore and three examples are currently in service. The Army received its first three examples (IA-1101, IA-1102 and IA-1103) on 20 March 2002 and the Navy received its first pair (IN-701 and IN-702) on 28 March 2002. The Air Force received its first pair (J-4041 and J-4042) on 30 March 2002. The Dhruv production for the military is expected to be 120 for the Army, 120 for the Navy, 60 for the Air Force and seven for the Coast Guard over a period of of 15 years. To meet this target, HAL is expected to progressively increase production every year, going from 12 to 16 aircraft, then to 20 and finally reaching a production peak of 24 aircraft. Some sources indicate that the peak production rate could be as high as 36 aircraft per year.

Defense News reported in March 2004 that HAL signed a $33 million contract with Israel Aircraft Industries (IAI) in February 2004, in which IAI will supply entire avionics packages for deliveries to both domestic and export markets. This ensures that all future production of the Dhruv will feature only Israeli avionics. The first Israeli-supplied avionics will fly on the Dhruv in January 2006. The avionics systems initially will be supplied for 100 helicopters, primarily for the Indian military market. About 300 helicopters eventually will be equipped with the IAI systems. The systems include electronic warfare packages, a day-and-night vision system, head-up display and communication systems. Defense News also reported that as of March 2004, about 40 Dhruvs were supplied to the three services and the Coast Guard. These 40 helicopters were equipped with indigenously developed avionics systems, supplied by HAL's avionics division and will not receive the Israeli avionics upgrade. The decision to use Israeli avionics was based on recommendations from the Army and Navy. The Navy, in its recommendations submitted to the MoD, requested IAI-built multipurpose surveillance radar and infra-red systems. However the indigenously developed SV-2000 maritime patrol radar will fill in the vital gap of surveillance and a FLIR turret will be acquired from either France or Israel.

B Harry of ACIG.org reports that the X-band SV-2000 radar is a pulse-to-pulse frequency agile set based on open architecture, with a detection range of 50 to 110 nautical miles, optimized for very low RCS targets such as sea-skimming missiles, flying against rough weather and sea clutter. It also features programmable PRF and frequency, with operational modes which includes anti-ship/anti-submarine surveillance, air-to-air surveillance, navigation, weather characterization and beacon modes, with Moving Target Indication (MTI) and Doppler processing. B Harry also states that the final production naval variant will also include the Mihir dunking sonar, developed by DRDO's Naval Physical Oceanographic Research Laboratory (NPOL). It combines the sonar dome, winching system and electronics into a compact lightweight package, designed for optimal operation under minimal power requirements. The DRDO's Defence Electronics Research Laboratory (DLRL) has also developed the Kite ESM (Electronic Support Measures) system, which has a 100% probability of detection and classification of hostile emitters. 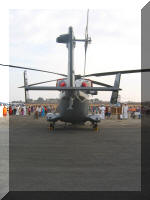