Crew: Has a crew of 4 in the ASW role and can also carry 28 troops in the utility role or 22 survivors in the SAR (Search & Rescue) role.

Comments: The Sea King Mk.42 is licensed produced by the UK-based GKN Westland, from Sikorsky - a US company. The Sea King Mk.42 forms the backbone of the Naval Air Arm's ASW capability and has purchased more examples from GKN Westland than any other overseas customer. Atleast 42 variants were delivered in total. It is estimated that only about thirty are still in service.

Compared to the small size of the Hughes, the Seaking is on the other extreme. It is as large as a small Bus and when it flies its leaves an indelible impression on the spectator! The Seaking was manufactured by the Westland company in Britain and was procured to fulfill an ASW (Anti Submarine Warfare) requirement in the Navy.

The first of the Seakings were procured in the early 70s. On 3 Nov 1970,  Two Seakings were handed over the Indian High Commissioner for UK. The two Helicopters IN-501 and IN-502 were commissioned as INAS 330 Squadron in 1971. Soon the first batch of 12 Seakings were operational.

Over the years, the Seakings not only formed the ASW squadron on the aircraft carriers, but became the ASW chopper of choice - equipping all Indian manufactured ships like the Godavari class frigates and the Delhi class destroyers. The Seaking also became the preferred mount for the Marcos (Marine Commandos).

A Ministry of Defense press release on 28 June 2004, stated that Hindustan Aeronautics Limited [HAL] and the Indian Navy [IN] signed an Memorandum of Understanding with AgustaWestland for repair and overhaul of the transmission system components of the Sea King. With a project cost of around Rs. 71.68 crore, it will go a long way in enhancing the fleet serviceability of the Sea King and reducing the down time. The facility became fully functional by the end of 2004. As a result of this, the IN has an uninterrupted repair & spares support and full overhaul capability to enhance its reliability and fleet readiness at all times. With this project, the IN has become self reliant in the service and full overhaul of transmission assemblies of this helicopter and also serves as a platform in achieving self reliance on other helicopters of foreign origin. The project also provides an opportunity to attain exposure to new technology on promotion of local vendors through indigenisation. This project is a major milestone in creating an indigenous, state-of-the-art generic repair & full overhaul facility. The joint efforts of the IN and HAL led to the signing of a contract for the Transfer of Technology [ToT] from AgustaWestland to HAL in March 2004, which was a prerequisite for setting up this facility at HAL, Bangalore.

An AgustaWestland press release on 26 September 2006, stated that the Indian Navy awarded a contract to return to service seven existing Sea King Mk.42B helicopters of the Indian Navy. Work on the contract will commence immediately with AgustaWestland providing a specialist team that will work with personnel from the Indian aerospace industry to undertake the recovery program. HAL will undertake the repair and overhaul of 'rotable' items, including the transmission and rotor heads in support of this contract. 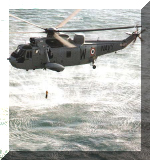