The Target Tug Flight was formed at Kalaikunda Air Base in West Bengal during 1972. Kalaikunda (KKD) is a big airbase with associated range facilities, which attracts large numbers of aircraft on deployment from the majority of Indian Air Force combat squadrons through out the year. The unit has only ever operated one type of manned aircraft and that is the venerable Hawker Hunter. Today they operate the last 8 aircraft still flying with the Indian Air Force.

This aircraft has served the Indian Air Force well, with 252 aircraft supplied since 1957. These included factory new aircraft and reconditioned machines from Belgium and Holland. At its peak the 1965 and 1971 wars with Pakistan the Hunter was standard equipment with 6 front line squadrons and an OCU. The last squadron to operate the type was No.20 Squadron, which also used the Hunter in the display role as the 'Thunderbolts'. They changed equipment in 1996 on departure from Kalaikunda, after having operated the Hunter since inception at Ambala in 1959. They passed their redundant aircraft onto the TTF as spares.

Kalaikunda Air Base has a good Hunter pedigree. Squadrons have served here with the Hunter during the 1965 and 1971 wars with Pakistan. In fact the Hunter has operated from this airfield non-stop since 1965. Active and redundant airframes can still be found in various locations on the airfield. Flying on the type is scheduled to finish in the year 2000, which might make the Indian Air Force the last air force to operate the type.

The Commander of the Flight, Wing Commander Mann, has the added responsibility of finding old soldiers a good home. So far at least 7 Hunters have been dispatched to locations in India and Bangladesh. The active Hunters fly in colour scheme that consists of Green and Grey camouflage, with aluminum undersides. On each side of the nose is painted a rather generous unit badge with the flight's nickname of 'Banners'. Previously, in the period 1990 till 1997, the flight had used a very high visibility colour scheme. This consisted of the standard scheme with the addition of yellow and orange stripes to the rear of the fuselage and tail plane. This had been introduced to improve visibility after one of the Hunters had returned from a target-towing mission with bullet holes from an over zealous attacker. 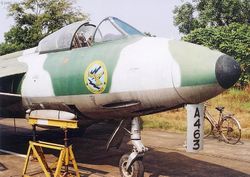 Today Hunter F56 and T66s tow a red target 300 metres behind the aircraft. This is fitted once the aircraft has lined up on the active runway by 2 ground technicians. Once in the firing area, deployed aircraft from Kalaikunda are vectored on to the tug and fire at the target from the front quarter only. Each aircraft's rounds are coated in a dye that aids the scoring process later. Upon return to Kalaikunda, the banner is dispatched by the aircraft into the special drop zone and taken away for analysis. It is placed on a grid and each aircraft round is identified by its dye and the results are passed onto the relevant squadron for assessment.

In 1978 the Chakor Pilotless Target Aircraft Squadron (CPTA) was formed at Kalaikunda, operating the Chakor RPV, an imported version of the Northrop Chukar. This RPV is a small lightweight target for anti aircraft gunnery, surface to air missile training and weapons system evaluation. The IAF had previously set up the Dudhkundi air to ground range in 1963. Later they developed the original over sea range near the Digha-Balasore coast in Orissa. Kalaikunda became the second airbase in India to offer air-to-ground and air-to-air facilities. The over sea range has an overall length of 17 km along the coast where a number of tracking instruments have been deployed to cover the total flight path of the vehicles. Today it is also used by the Defence Research & Development Organisation (DRDO) to test a variety of missiles.

The CPTA squadron was merged with the TTF on 14.8.98 and became its 'A' flight. By this time the Chakor had reached the end of its operational career and was about to be replaced by a RPV manufactured in India called the Lakshya (True Aim). The Aeronautical Development Establishment of DRDO developed this RPV and it was introduced in 1996 with Hindustan Aeronautics as the prime sub contractor.

It is a re-useable pilotless target aircraft, which has been accepted as the standard aerial target for the Indian Air Force, Navy and Army. The Lakshya is a fully manoeuvrable aerial target system for training air to air missile firing, air defence guns and surface to air missile firing. The TTF currently operate 6 of these and during our visit they were detached to one of the ranges, where they can be controlled by technicians and pilots alike from their air conditioned ground control centre.

They are boost launched from a zero length launcher and then powered by a jet engine in the cruise, reaching speeds up to 0.53 Mach. They can be flown in either racetrack, snake track or dog bone profiles with 'hot legs' specifically designed to suit the training requirements of gun and missile crews. Finally they are para recovered over land or sea. The unit has a crushable nose cone, which absorbs the landing on impact, minimising damage. Because of their modular construction these are easily replaced, enabling quick refurbishment and turn round. The Lakshya tows behind it two expendable sub targets which can be Infra Red or Radio Frequency signature augmented. These can be fitted with scoring systems based on Doppler radar returns.

During the Kargil Conflict, the Indian Air Force assessed the possibility of using the Hunters from this unit as a ground attack aircraft at altitude. The Hunter is one of the few aircraft able to operate with armament from Leh airfield at 11,540 feet. Two aircraft were sent as far forward as Ambala Air Base, north of Delhi, with the others on standby at Kalaikunda. In the event their services were not required, however what a fitting finale that could have been for this wonderful aircraft in the twilight of its illustrious career.

This feature is based on a trip made by Phil Camp and Simon Watson to Kalaikonda AFB between 21-24 December 1999. Versions of this article have also appeared in the February 2000 issue of VAYU AEROSPACE and the March 2000 issue of AIRCRAFT ILLUSTRATED.