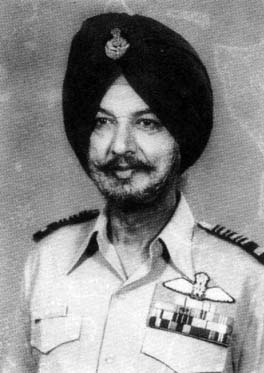 Dilbagh Singh was the second Sikh Chief of Air Staff, the Indian Air Force had after Marshal of the Air Force Arjan Singh. Born in Punjab on 10 March 1926, Dilbagh took an interest in flying at a very early age. He joined the IAF in 1944 at the height of World War 2. Heflew operational sorties with No.10 Squadron and later posted to the No.1 Squadron flying Hurricanes at Kohat in 1945.

Promoted to Squadron Leader in 1954, he assumed the responsibilities of Officer In Charge of Flying at the Ambala Air Base. Command of a Squadron came his way in August 1955, when he took over No.2 Squadron flying Spitfire XVIIIs. Dilbagh did not stay with No.2 Squadron for long, he handed over command in February 1956 and went to France to get trained on the Mystere IV-A fighter. After returning from France, Dilbagh took over as the CO of No.1 Squadron flying the Mystere IV-A at Kalaikunda.

After arriving in India, Dilbagh undertook the first official 'Supersonic Bang' over India in New Delhi when the Mystere IVa was showcased to the Nation. After four years of operational flying, Dilbagh Singh went to Jamnagar as the Chief Instructor at the Armament Training Wing.

Dilbagh shot into the limelight in late 1962, when he was selected to be trained on the MiG-21F which was being acquired by India from the USSR. He led the first batch of seven 'chosen' pilots and 15 engineers for training at Lugovya, an airbase in Kazakhstan in the erstwhile USSR for training on the MiG-21F fighter. After undergoing training for five months, the team came back to India to form the core of the first supersonic squadron, No.28 First Supersonics Squadron. Dilbagh Singh raised the unit in Chandigarh with an order of battle of six MiG-21s in early 1963.

In May 1965, Dilbagh handed over the command of No.28 Squadron to Wg. Cdr. M.S.D. Wollen (later Air Marshal) and joined Air Headquarters as Deputy Director (Weapons). He was holding the staff job till the end of the 1965 war with Pakistan, when he took over command of Halwara AFB in the rank of Group Captain. His services were recognised with the award of the Vayu Sena Medal in 1966. More staff appointments followed.

At the outbreak of the 1971 War, Dilbagh Singh was under Central Air Command, as Air Officer Commanding of Lohegaon AFB, near Pune. From his base, No.35 Squadron flying Canberras struck Karachi Oil Tanks and Harbour Installations. Dilbagh's responsibilities included providing facilities to aircraft of the maritime air operations. Dilbagh became the Senior Air Staff Officer in the Western Air Command in 1976 and finally became the Air Officer Commanding in Chief (AOC-in-C) of Western Air Command in 1978. In 1979, He received the Param Vishist Seva Medal for distinguished service.

In 1981, Dilbagh Singh became the Chief of Air Staff, in the rank of Air Chief Marshal. His tenure lasted three years till 1984, in which time the IAF saw the induction of the MiG-25, MiG-23 and the selection of the Mirage 2000. He was also the Commodore Commandant of No.28 Squadron. Dilbagh Singh laid down the office of CAS in 1984, by which time in a career spanning four decades, he had about 5000 hours of flying on different types of aircraft, was decorated by the government for distinguished service thrice.