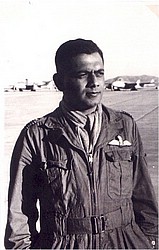 Those who have served in the Indian Air Force have made their marks in different ways. Some are remembered for being great pilots, of course, and some for being great commanders. A few are remembered for being effective administrators, or technical wizards, or for doing other unglamorous but valuable work outside public view. This is the story of a man whose major contribution - notwithstanding some highly effective episodes of squadron service and command - may have been in flying instruction, teaching others that fundamental Air Force skill. Here, then, is an encounter with one of the IAF's pioneer QFIs:

The picture that emerges is that of an officer who held a ringside seat and many insights, into events and personalities of exciting periods in the service's history. And just by the way, a wealth of flying experience - there are not many desk-bound jobs in his IAF service record. An old-fashioned sort of air force career, you might say. But say it with thanks, if you do.

Cecil Hugh Lawrence Digby was born in Mangalore in 1925. His father was in the Customs service.

He grew up in Bombay, and went to school at St Mary's. While he was still a youngster the family visited Juhu, and he overheard an English-accented lady inquiring about "the next plane to Karachi", in plummy tones that he clearly remembers vividly - some seventy years later he mimics them with great relish, sitting across the table in an English pub. That day at Juhu, he says, "was the first time I saw aeroplanes."

In 1943 he joined St Xavier's College, in the same city, but this was the time of the Quit India movement. College schedules were regularly disrupted, the college was often closed, and when the opportunity to join the Air Force came up he abandoned his college course. He is good-humoured about it, and describes himself as a "college drop-out" - but it actually had severe consequences later; he could not go on a Test Pilots' course he had hoped for, because holding a university degree was a requirement.

Cecil Digby tried to join the IAF at 17, which was below even the reduced wartime minimum of 171/2 years. His status as a student was not an obstacle at the time; he got past the initial stages, and was asked to produce evidence of his educational qualifications. The only documentary evidence of educational qualification he had at the time was his Senior Cambridge school-leaving certificate - but that bore his date of birth. Someone spotted it, worked out that he was under-age, and that was that. "Go back and grow up."

The young Cecil Digby finally got into the Air Force in January 1944. Initial ground training was at the Initial Training Wing (ITW) in Poona (now Pune), which was housed in the Parsi Orphanage. "It was a huge place," he recalls. "Lovely - it had everything we didn't have later in service, like bathtubs and showers."

One of Digby's course-mates, and a great friend, was David Greenhorn, whom Digby recalls as "an excellent lightweight boxer, very fast on his feet and very quick with his punches, which used to come in from all directions." He particularly remembers David Greenhorn being sent into the ring for a demonstration bout with a British Army sergeant, a boxing instructor in Poona. "They were only supposed to spar," Digby writes, "but I think that the Army chap felt a bit put out with Dave's superior ability, especially in front of a large British Army gathering, and he deliberately floored Dave twice. On rising up from the second fall Dave cut up the sergeant so badly that the match had to be stopped and the sergeant carried out of the ring."

He then went to Secunderabad for initial flying training on Tiger Moths. The instructors were mostly RAF, and Digby remembers that "some were prejudiced", against Indians. Digby's assigned instructor was a wartime reserve officer called Clumec. He was not a pilot by profession, but a planter, who had "flown a bit" before the war. At that stage of the war the beleaguered RAF would appear to have been happy to accept anyone who could execute a take-off and landing, for commissions (and even instructional duties) in India. "He was a 'book' instructor", Digby says. "He had never flown anything but Tiger Moths."

Long after Digby, and several other pupils, had graduated from Tiger Moths nominally under Clumec's instruction, and moved on to more advanced types, Clumec himself was actually sent to convert to Harvards! There must have been a sense of embarrassment somewhere, among the senior officers who allocated personnel to flying training at the time.

"But many of the instructors were good RAF pilots too," Digby hastens to add. Some of the best among them were operational pilots, supposedly on a "rest" tour after the rigours of a front-line tour in Burma. They were referred to as 'Q' instructors. Digby recalls that they had no great teaching techniques, and had not undergone anything like a QFI course - but they were, for the most part, experienced and personally good fliers. "You just had to follow them."

"We didn't have instructors," Digby amplifies later. "We had demonstrators."

Pt Off Digby's room-mate at AFS Ambala was Pilot Officer Wilbur McNeill, later another of the top rung of IAF pilots, and destined to raise one of the first Hunter squadrons for the IAF. His and McNeill's was the 26th Course. The course also included Rashid "Richard" Khan and FS "Camel" Hussein, later to achieve air rank in the Pakistan Air Force.

"The Pakistanis" - by which he means those in service who opted for Pakistan on partition - "were all smashing fellows," Digby says. "Proper officers," Loughran adds. They both say this soberly, acknowledging qualities with complete lack of prejudice - but also with not the slightest doubt about their own choices at the time.

While Digby was at Ambala, a batch of Indian cadets came back from Canada. They were all highly disgruntled by what they felt was prejudiced treatment while they were there. The RAF staff at Ambala were "put out", Digby says with a grin. Partly for this reason 26th Course did not have a formal wings parade, that goose-bump-inducing event at which wings are awarded to newly-fledged pilots. Wings were simply given out in the Mess.

On completion of the Advanced course Digby and his course-mates, still in Ambala, were simply given Hurricanes and told to fly. Digby recalls that he "tried to do the same as in a Harvard - a stall turn. And the prop stopped." He went into a tail-slide followed by an incipient spin, but luckily, after what must have been a few hairy moments, the prop restarted. This was yet another symptom of the lack of a proper instructional infrastructure - the catch phrase at the time, it would seem, was "Just go and fly". There seems to have been an assumption that natural selection would weed out the unfit and the incompetent, and never mind the costs.

The next formal step in training was at the famous 151 Operational Training Unit (151 OTU) in Peshawar, on Hawker Hurricanes. "They were pretty clapped-out Hurricanes," Digby confirms cheerfully that India was at the tail end of a rather extended supply chain, certainly for Hurricanes. "The fabric used to tear off, in high-speed manoeuvres!"

At the OTU, McNeill and Digby were once sent up with two instructors and told to try and shake them off. Digby put his Hurricane into a dive, and found he could not pull out - "Probably, the entire tail surface must have reversed," he says. He eventually pulled out with no more than a few thousand feet to spare. When he landed, he says, the instructor "took a running kick at me."

Certainly at both Ambala and Peshawar, Digby's experience was that the group that mixed least with other nationalities and races was not in fact the British - it was the South Africans. "There were quite a few in India, at that time."

Nevertheless, Digby seems to have enjoyed his time at OTU. He and his course were flying reasonably modern, high-performance types for the day. Both the Bouche brothers were there at the same time. He recalls, with animation, "We would do cross-over turns at low level, practically between the trees!"

As part of the course, they would practice night firing and bombing on the range, lit by goosenecks. It sounds almost incredible now, but again, the instructors would simply say, "Follow me", or "Follow what I do", and with no further briefing than that, lead a stream of ten or twelve aircraft into the air and on a bombing run.

Another of Digby's course-mates, Pilot Officer Andrew Brown "Andy" Wiseman, once strafed a set of lights on the range, but had clearly targeted the wrong lights - on landing, he got a phone call informing him that he had shot up a police station!

The course was not without tragedy. Almost at the end of the course, on 3rd May 1945, Digby's friend Pilot Officer David Greenhorn, who had been with him at every stage of training, was killed while carrying out air-to-air firing practice in a Hurricane. Interestingly, it would seem the reason for the crash was never divulged, supposedly in the interest of preserving morale - years later, Digby would write, "We think he spun in from about 5,000 ft while carrying out a tight evasive turn."

Digby and his batchmates completed the course at Peshawar in May 1945. He was posted to No 4 Squadron, Royal Indian Air Force, in June that year. He and his course were thus just too late to see action during World War Two.

Digby was not to know it then, but many of his future years of service were to be devoted to addressing some of the training lacunae he himself had experienced at first hand, in learning to fly. But all that was in the future; for now, he was all caught up in the excitement of his first squadron posting. And No 4 Squadron was certainly going places.