The final resting place of Jumbo Majumdar in Lahore

The final resting place of Jumbo Majumdar in Lahore

Much had been written about the late Wg Cdr Karun Krishna Majumdar over the years.  Watch this video by Wg Cdr A S Bedi , or listen to this podcast from Matt Bone where I discuss about Majumdar's life.  Majumdar's short but illustrious career was cut short during an aerobatics display over Lahore in February 1945 and in a flash, one of the greatest legends of the Indian Air Force was no more.

On the date of his death anniversary on February 17, 2022, I had put out this tweet about Jumbo's last resting place.  When he died in the air crash on 17 Feb 1945,  his remains were ceremoniously buried at the Lahore Christian cemetery, which exists today at Jail Road .  Google Maps Link

In the closing shots of the documentary, you get a glimpse of the Jumbo's grave in Lahore cemetery. The cemetery still exists , as the "Gora Qabristan" on Jail Road in Lahore. https://t.co/1VOQ3gkjRQ pic.twitter.com/dN1TyZVjeb

Normally for the airmen lost in WW2, the Common Wealth War Graves Commission took up the responsibility of taking care of their last resting places "in perpetuity".  However, their process included the re-internment of the graves to more centralised locations and upkeep of these "CWGC Cemeteries".  While most of the war time graves were consolidated - perhaps to reasons best known to CWGC or the Majumdar Family, the grave of Wg Cdr Majumdar was left where he was buried in Lahore.   Instead, his commemoration was just the inscription of the name in a "Register" that is maintained at the New Delhi CWGC Cemetery. 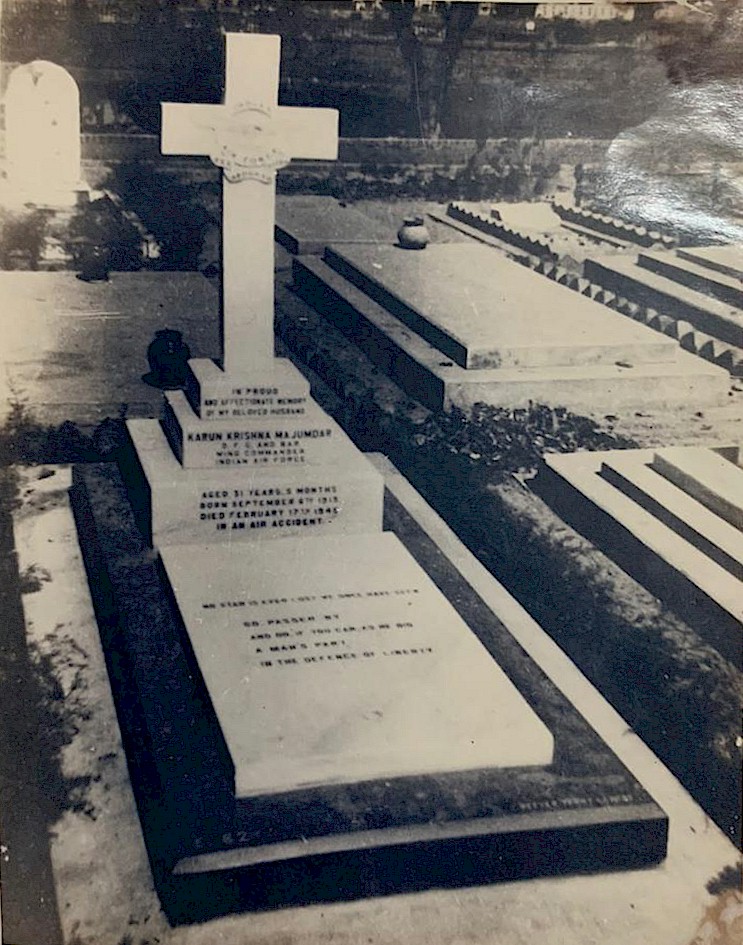 The original grave and marker stones at Lahore. Note the amount of spacing between adjacent graves and the black plinth of the original grave.  Compare with the 2007 Photo below.  Photo Courtesy : J R Nanda

As the Majumdar family migrated to India after independence, it was always left to wonder if his original place of burial existed and whether any upkeep is being done on it.   Ms Rabia Zafar,  a historian from Pakistan from Karachi had actually photographed his grave in 2007.

here is a photo pic.twitter.com/e7M3PRoiGx

The cross on the grave with the badge of the RIAF had broken off, but it was carefully laid on the main grave.  There was some consolation that the grave was still around and perhaps someone could take up ownership of maintaining it.

The story of Jumbo Majumdar somehow reached an Indian ex-pat living in the US. Sajid Malhotra, hails from an IAF family. He was sent some links about Jumbo Majumdar which set him off on a journey to know more about this man. He ultimately found out that Majumdar's grave was in Lahore and he had the same questions that everyone else had.. Is it still there? is it safe? who is maintaining it?

Sajid decided to reach out to a friend of his Dr. Nadeem Ahmed, who originally hailed from Lahore in Pakistan, but currently practising in the US.  Sajid gave the backstory of his interest and made a request, Does he have any contacts back in Pakistan who can visit this "Gora Kabristan" and check up on the status of the grave?

Nadeem made arrangements in Lahore to have the grave checked up and sure enough, his contacts not only found the grave but also cleaned the grave up and restored the cross back to its original position. The photographs are shared below: 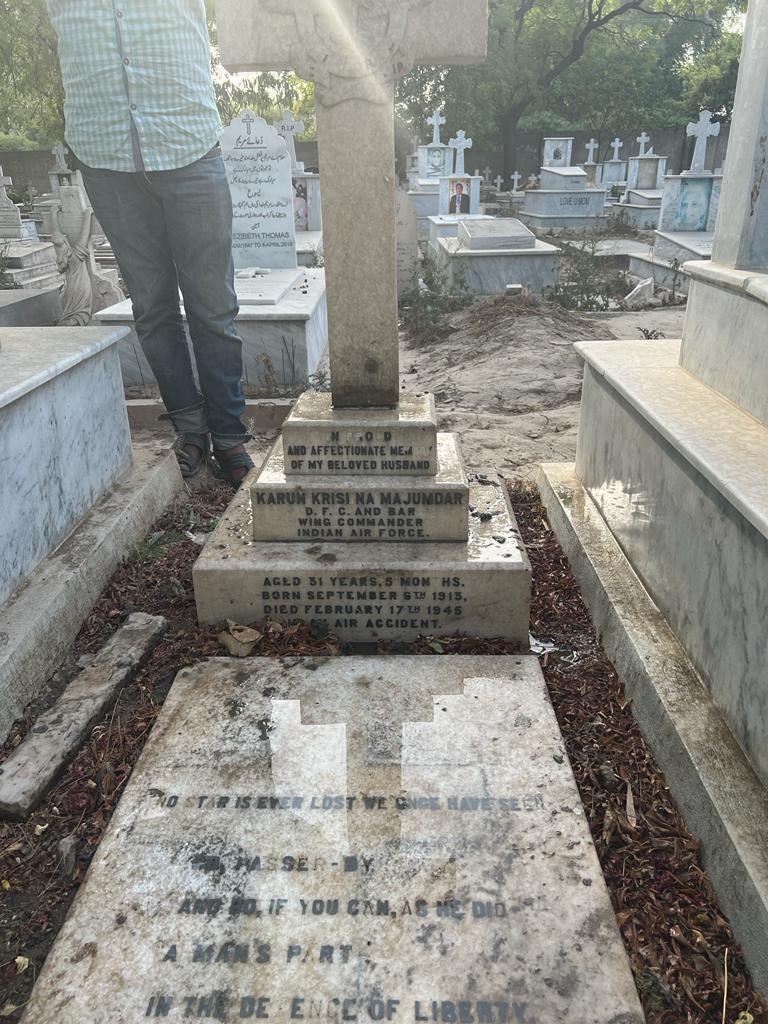 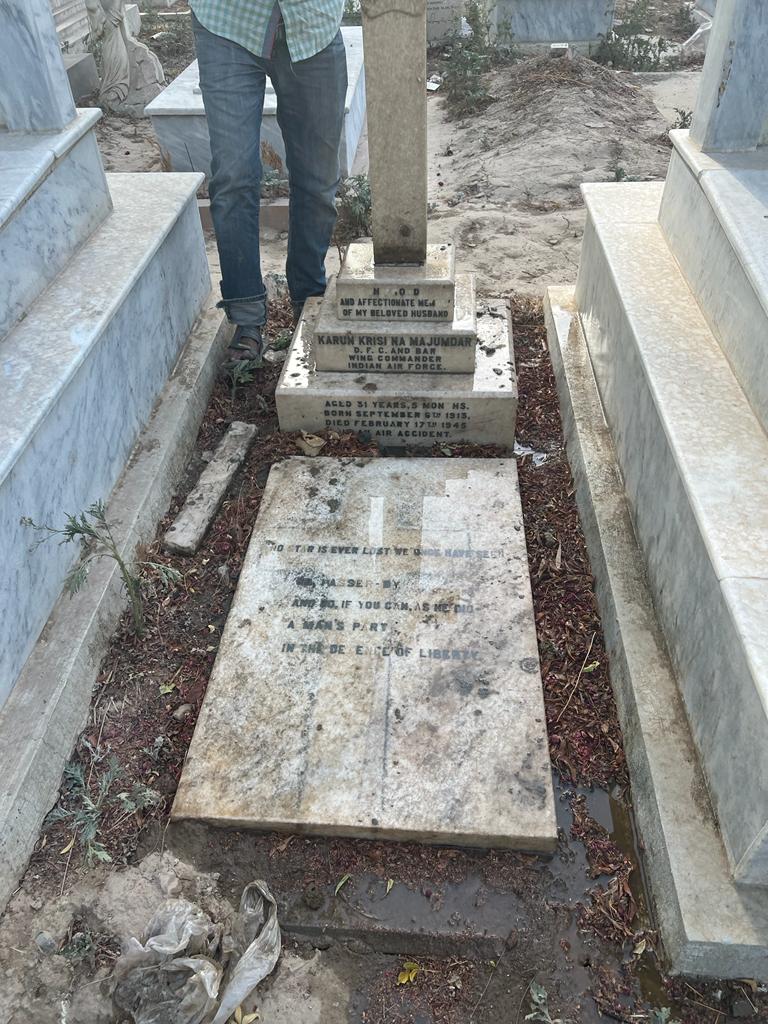 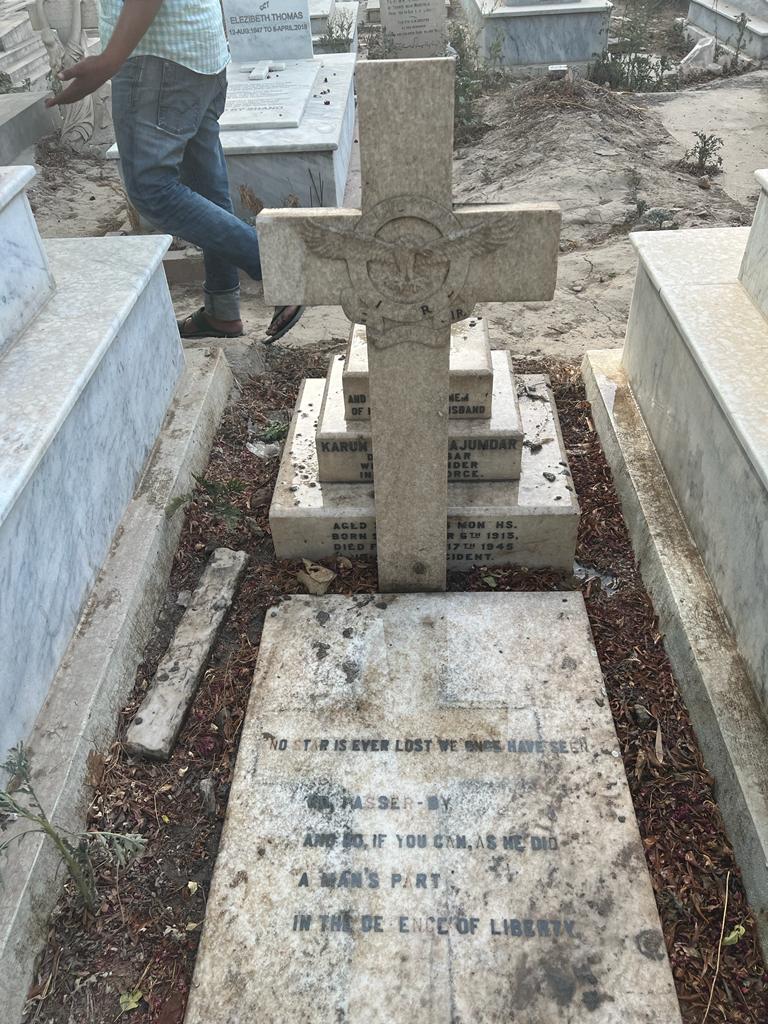 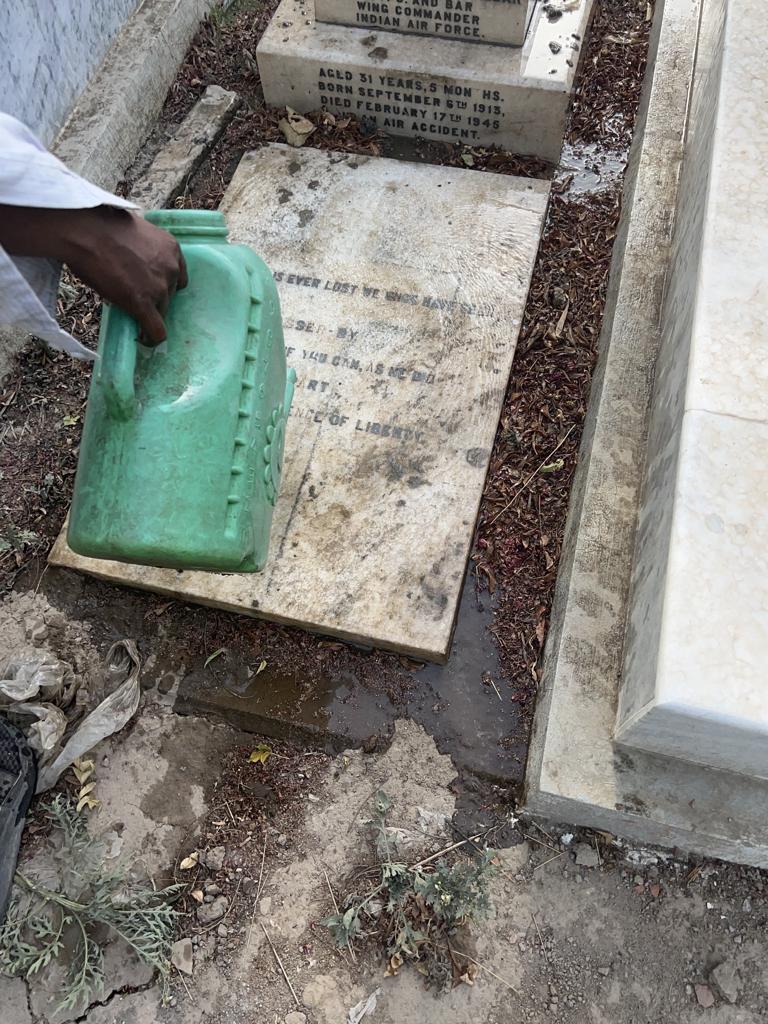 To say one was touched by these photos is an understatement.  Jumbo Majumdar was a legend in the pre-Independence Indian Air Force, which had a number of pioneering officers who would later form the nucleus of the Pakistan Air Force. Many of them would have known Jumbo personally and admired him.  In a way it is apt to see that Pakistani citizens have the same amount of interest that some of us Indian Air Force Historians have.

The team sent to clean up the grave is currently working on painting the etched lettering on the slabs so that it is more readable.

They also shared a video of the grave and its surroundings. Note the adjoining graves are more recent and suggest 're-use' / 'recycling' of old plots. Thankfully they left Jumbo's last resting place alone. pic.twitter.com/wMsQ531HGi

Nadeem's contacts also shared a small video of the area.  One important takeaway from the video is that adjoining graves are more recent ones.. signifying the 'reuse' of grave plots by the cemetery authorities.  Reuse of plots is a common practice across the world and however shocking it might appear to be there is a possibility that even Majumdar's grave could be a candidate.    But the fact that Majumdar's grave was not touched for eight decades indicates that someone realized its significance of it and left it untouched.

This all begs the question - what is the future of the grave here? Can the Indian government or the Commonwealth War Graves Commission take ownership of the grave to ensure it is taken care in perpetuity - after all India does contribute to the upkeep of the CWGC graves elsewhere.  Failing which, can this be one of the tasks of the Air Advisor to the Indian High Commission in Pakistan?

It is not out of one's realm to even suggest that the Pakistani Air Force take charge of this, as an acknowledgement that many of the PAF Pioneers were once members of the Royal Indian Air Force and they would have wanted the same in their time at the helm.

Let's do hope that there is some outcome of this effort and that some organization will take up the responsibility of ensuring his final resting place is not lost forever.