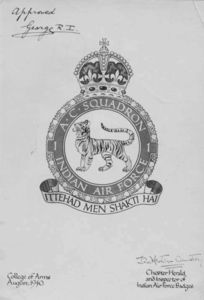 The Battle for Imphal that raged from March to July 1944 was essentially a siege operation by the Japanese against the Allied forces concentrating in the Imphal valley. The British and Indian forces situated in the valley were surrounded by three Japaense Army divisions, and their stand to repel the Japanese offensive  was bolstered only through the massive supply chain by air maintained by the Commonwealth Air Forces and the United States Air Forces. At the time when the offensive started, the Imphal plain was home to the RAF 221 Group, commanded by Air Vice Marshal S F Vincent, which operated from six Airstrips. Imphal Main (present day Koreingi) was to the north and was the most important.  Palel to the south was the second major airstrip that could operate all year round. Additional landing grounds existed at Wangjing, Sapam, Kangla and Tulihal.

Imphal main was the main landing ground for the Air Supply operations. It was also home to two Hurricane Squadrons which operated in a Tac/Recce role.  No.1 Squadron , Indian Air Force under Sqn Ldr Ajran Singh and No.28 Squadron, Royal Air Force under Sqn Ldr H G F Larsen. Another two Hurricane Squadrons, Nos 34 and 42 operated in the Bomber role from Palel airfield. Sapam airfield had another two RAF units, No 5 Squadron on Hurricanes and No.136 Squadron on Spitfire VIIIs.

Another six Dakota Squadrons and a Wellington Squadron of the RAF operated the transport component flying into the Valley.

As the siege progressed, more RAF squadrons would take part in the battle, including five additional Spitfire Squadrons (81,136,152,607 and 615) and  a Beaufighter unit (No.176 Squadron).

Facing the force of half a dozen Hurricane Squadrons was a Japanese air component of eight ‘Sentais’ (Squadrons).  These consisted of four Sentais flying the Nakajima Ki-43 Oscars. (Nos 50 64 87 204), One unit each flying the Kawasaki Ki48 Lily, Mitsubishi Ki21 Sally, Nakajima Ki49 Helen and the Mitshubishi Ki46 Dinah.

No.1 Squadron, Indian Air Force had only arrived in the Imphal valley on 3rd February 1944. Led by the dashing 25 year old Commanding Officer, Squadron Leader Arjan Singh, the unit had previously been spending time in watch and war duties at Kohat Air Field on the North Western Frontier.   Arjan Singh had taken over command on 3rd September 1943. He had been the flight commander of A Flight for at least a year before that. 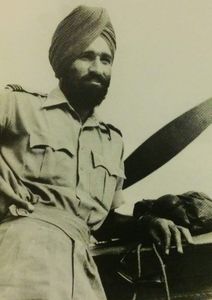 A month after his taking over command, RAF Kohat was visited by a delegation of senior RAF Officers – Air Marshal Baldwin, Air Commodore Hunter AOC 223 Group and Gp Capt Proud, the IG, IAF. It was during the visit of Air Marshal Baldwin, that Arjan Singh approached the Station Commander Wing Commander Mukerjee with a request. It has been nearly two years since the Squadron had withdrawn from their first tour of operations in Burma. Arjan made a request that No.1 Squadron be moved to the Burma Front to experience combat once again.  Arjan’s enthusiasm paid off, and the Squadron was ordered to move to the Burma Front.

The Squadron at that time was operating the Hawker Hurricane Mk IIB aircraft. The Hurricane was legendary in its role of the defender in the Battle of Britain.  It was a capable aircraft in the early years of the war, but by 1944 in Burma, it was no match for the more nimble Japanese fighters.  While the initial variants of the Hurricane were armed with eight .303 inch calibre Browning Machine Guns, the Mk IIB operated by No.1 was equipped with twelve Browning Machine guns – six in each wing. It could also carry two 250lb bombs, one under each wing, or an extra set of long range fuel tanks. Both the bombs or the tanks degraded the performance of the aircraft and they would be easy meat if they encountered aerial opposition.

The move commenced late January 1944, and was completed by 3rd February 1944. The Indian pilots would not know it then, but they had literally landed in what would later become the hornet’s nest.

The Squadron had a ground party reach Imphal to set up camp ahead of the arrival of the air component. Entire party was available when the first of the fourteen Hurricane IIB fighters arrived at Imphal on 3rd February at 1230 hours. The occasion was however marred by an accident when  Flying Officer Sk Ibrahim overturned on landing. He landed on the katcha strip next to the paved runway and the aircraft tumbled over on its back. Ibrahim was one of the few veterans of the first Burma Tour and was noted for his careful and steady flying. His accident was both embarrassing and disappointing.

The next day the AOC, Air Commodore Proud, gave the Squadron a talk that was both a ‘Strawberry’ and a ‘Raspberry’ . He praised the squadron as a ‘Crack Unit of the IAF’ and on the other hand gave a lecture about its accident rate!

No. 1 Squadron lost no time in commencing its allotted work. The first sorties of the squadron, flown by Flt Lt Rajaram and  Fg Offr B R Rao was cut short due to R/T Failure.  The second mission of the day, flown by Sqn Ldr Arjan Singh and Fg Offr A C Prabhakaran  to recce the Mowlaik area was successfully completed.

A series of sector reconnaissance were flown on the 5th. During February the squadron flew more than 60 sorties on offensive, tactical, photographic and sector reconnaissance. The main task was the observation of Japanese movements in Chindwin, Kalewa and Tiddim areas. The upper Chindwin area was marked for special observation. Sometimes the pilots went as far east as the Myitkyina-Mandalay railway. On these sorties, they discovered heavy traffic on Japanese lines of communication. Which was a warning of things to come .

By the end of February  141 Operational Sorties were flown.