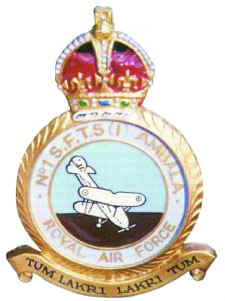 No.1 Service Flying Training School was established at Ambala on 23rd October 1940. The SFTS consisted of six flights, A to F, all located on the station.  The School ran its pupils through two courses, the Intermediate Training School (ITS) and the Advanced Training School (ATS), each of about three months duration. Initially the intake was through pilots who joined in directly from the Initial Training Wing. After the establishment of No.1 EFTS (Elementary Flying Training School) and No.2 EFTS, pupils would come to SFTS at stage III.

After the OTU was formed at Risalpur in 1942, the ITS and ATS were combined and the duration of the course reduced to three and a half months. Cadets passing out of the SFTS were sent to the OTU to complete Operational Training. The SFTS trained 39 "Courses" during the duration of the war. No.40 PC passing out in February 1945.

In 1946, the OTU at Peshawar came to Ambala and was amalgamated with the SFTS. The SFTS took on charge several Hurricanes, Vengeances etc.

In 1947, the SFTS was renamed Advanced Flying School (India). It was known by this name till August 1949, when it was upgraded to No.1 Air Force Academy.  No.1 AFA later moved to Begumpet and was disbanded in 1955.

The Unofficial crest of No.1 SFTS is shown on left - It shows a Hawker Hart that has nosed over. The Harts ofcourse were used only upto the end of 1942, after which Harvards were employed.

The motto on the unofficial crest is tongue-in-cheek - The urdu-to-english translation of "Tum Lakri, Lakri Tum" was "You wood, wood you?" or to put it more accurately "You would, Would You?" , refering to the luckless student pilot who was unfortunate enough to make a mistake.