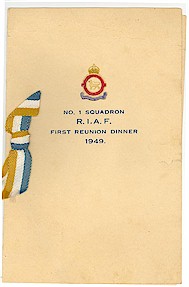 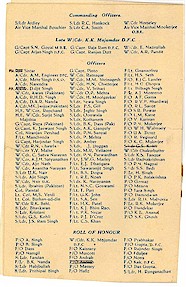 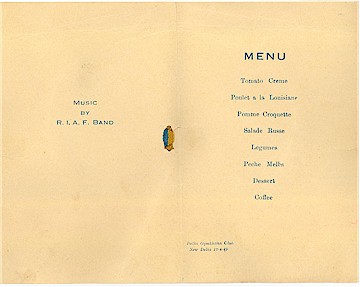 This is a very interesting document (if thats what it can be called). This was sent by Deepak Singh from US, from the collection of Late Air Commodore RHD Singh. These are scans of the Dinner Menu for the first Re-Union held by No.1 Squadron RIAF on 19 April 1949 at the Delhi Gymkhana Club.

The first page carries the (interesting) No.1 RIAF Crest and the tricolor ribbon - Since India was yet to become a republic this is the old 'RAF' style crest with the Kings crown and all. The Second and third page contains the actual menu. The fourth page is the most interesting. It carries a list of Commanding Officers, Roll of Honor and a Complete roll of all the Officers who had served with No.1 Sqn till that time. A total of 103 names - they include six invitees from Pakistan too.

It should be noted that at the time of the Reunion, No.1 Squadron was not in existence - having been numberplated. (The original assets of No.1 Sqn went to the RPAF - which renumbered the sqn to no.5!).  A Photograph from that occasion is reproduced here 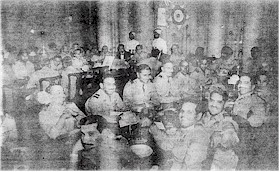 Then Fg Officer Dilbagh Singh, who would later become the Chief of Air Staff, had a similar dinner invitation on which he had collected the signatures of the senior officers present. This invite was subsequently presented to the Tiger's museum