10 Dec 71 - The Station pumped in 8 Hunter softies on the heels of the enemy who was fast dwindlinq, which is quite evident from the number of sorties launched. In addition 2 Casuality evacuation sortis were again launched.

11 Dec 71 — In view of the inadequate targets available in our sector, the station wag asked to support 11 Inf Div in NAYA CHCR Sector. The Station launched a total of 14 fighter and 5 Causality evacuation sorties.

12 Dec 71 — The enemy bomber visited again at about 0230 hrs, but was unable to lob any bombs inside the perimeter of the airfield. The Air Defence again pumped in few rounds to scare the enemy away.

The Hunters carried out 10 sorties in the 11 Inf. Sector destroying targets of opportunity in support of ground troops. In addition to this 4 casuality evacuation sorties were also carried out.

13 Dec 71 — The Station again mounted pressure sorties in 11 Inf Div and 12 Inf Div sector in pursuit, of enemy which was hard to find set ablaze. 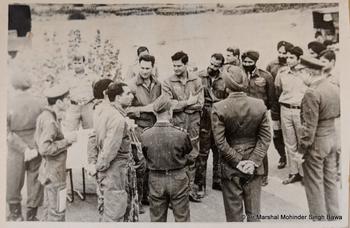 Pilots of No.122 (Ad-Hoc) Squadron seen in conversation during the visit of Air Marshal Minoo Engineer to the base.  Seen in the photo : Farokh Mehta (Stdg 2nd from left), Kukke Suresh (6th from Left), D K Dass (9th from Left) M S Bawa (10th from left - back to camera) Minoo Engineer (to the right of photo)

14 DEC 71 - Once again the Station launched 12 Hunter sorties to enable 12 Inf Div to gather. courage to make head-way into the enemy territory in pursuit of their AIM to capture RAHIMYAR KHAN. The Base Cdr. apprised the GOC 12 Inf that there was no enemy visible in their area of likely advance end there was not likely to be any resistance till RAHIMYAR KHAN. The Base Cdr. even offered to take him personally or any of his Bde Comdr/Col GS in a Hunter trainer with a fighter cover to enable him to assess the situation and force on towards RAHIMYAR KHAN. No encouraging reply vas received, which only showed the reluctance to move forward and an added excuse that one of his Bde was moved into Il Inf Div Sector. Historians will ask at a later date as to why 12 Inf Div was depleted of its forces when the enemy was completely destroyed opposite them and RAHIMYAR KHAN was within easy reach with complete situation In their favour.

15 DEC 71 - The Station mounted pressure along RAHIMYAR KHAN – ROHRI axis and NAYACHOR area to enable 12 Inf Div and 11 Inf Div to move forward and capture maximum territory in view of imminent fall of DACCA and subsequent likely CEASE FIRE in this area.

12 Inf Div Sector had complete air superiority right from the first day and now with the enemy's amour destroyed and due to complete rout In his rear as nothing vas allowed to move. The Base Cdr expected 12 Inf Div to make a definite headway making a wedge deep Into the enemy territory but the progress on the ground appeared to be hardly any. It appeared that
there was no will to do so.

During the course of the day a train carrying full Sqn of Armour was intercepted near KHAIRPUR. Large number of tanks and their ammunition and personnel were hit. For the first time the Hunters saw Air opposition in NAYACHOR areas and two MIG -19s were compelled to go into the ground In the last ditch maneuvers

About an hour before sundown there came a Flash message from COC 12 Inf Div informing about two STARFIGHTERS (104s) seen heading towards JAISAIMER. Since tie Base had seen no aerial combat so for the Base Cdr immediately had six Hunter aircraft in air to welcome the STAR FIGHTER but to his dismay no STAR FIGHTER showed up and he sent a message in reply to GOCs message – “Thank you for the Information. Reception Committee of six hunters disappointed"

16 DEC 71 - The Base Cdr passed a message in the morning to all unit/section Comdrs that “He presents Bangala Desh to the nation on the eve of his Birth Day" and thanked all for showing grim determination to repell the enemy from our soil" The BANGLA DESH in actual fact fell at 1631 hrs. the same day and stalling of the events by the BASE CDR came true.

10 more Hunter sorties were launched with one Bombing raid at RETI JN. Due to the unreliability of the EMRU’s Bombing and NEPALM raids, though much desired by the Base Cdr, were not launched for fear of hang up. In addition to this one casualty evacuation sortie was also undertaken.

Our beloved Prime Minister Smt INDIRA GANDHI announced that unilateral ceasefire vas to be observed from 2000 hrs 17 Dec 71. This vas followed by a message from AOC—1n-C Western Air Command asking all AOCs/Stn Cdrs/Base Cdrs to cease all Offensive action after 2000 hrs 17 Dec 71 and authorised Base Cdrs to take any retaliatory action in self defence required under intimation to him.

17 Dec 71 — Since this vas the last day of the war and the cease fire was to come into force from 2000 hrs , the Base once again hammered at all enemy positions opposite 12 Inf Div and 11 Inf DIV area by launching 14 Hunter sorties .

The ceasefire was accepted by PAKISTAN after this short, crisp and decisive encounter INDIA. PAKISTAN never expected even in his wildest dreams that he would have to suffer humiliation. at the hands of Indians.