5 Dec 71 - On receipt of regarding suspected movement of Armour the Base Cdr ordered missions to standby for TACR at first light. Air Op was also

cautioned to carry out reconnaissance In the area and render any assistance required by the Hunters. The repeated tele— phone calls from the GOC 12 Inf Div left no doubt in the mind of Base Cdr about the helplessness of the Amy in the LAÜNGEWALA area, due to their scanty deployment and the pre occupation of Div with their much planned advance towards RAHIMYARKHAN.

LAUNGNALA post having come under Increasing enemy pressure made frantic calls for help from Div HQ. Div HQ had no options but to depend on the AIR FORCE to save the day. At about 0715 hours when the post was about to be over—run, the first Hunter mission arrived at the scene scanning the road from RAMGARH to LAUNGEWALA. The mission immediately reported the presence of T-59 tanks, confirmed also by the Air Op. The mission lost no time in engaging the tanks advancing towards the LAUNGEWALA post. The transmission of the Hunter missions were being monitored by the Base Cdr, who ordered the subsequent strakes without any delay. Missions were launched one behind the other in quick succession to beat and destroy the enemy’s amoured thrust.

This turned out to be a clean battle, one of its kind, between PAKISTAN amour and the INDIAN AIR FORCE. Never In the history before, a more decisive battle has ever been fought between the AIR alone vs. the ARMOUR as was done at LAUNGEWALA.

With a total of Four Hunter aircraft available at the disposal of the Base Cdr, the Base vas able to launch 17 sorties destroying of the enemy's amour. The tanks were seen ablaze as reported by the Air Op and Coy at LAUNGEWALA.

An enemy Intercept by our Army In the evening revealed the sagging morale of the PAKISTAN ARMOUR indicating casualties In men and material and SOS call for close Air Support, without which armour advance considered ompossible, which is reproduced below :

At the fall of the day the following message was received from GOC 12 Inf Div Maj RF KHAMBATTA :

PERSONAL FOR WC CDR BAWA FROM GOC ( . ) HAVE FNCELLENT CO-OPTIATION AND SUPPORT TODAY ( . ) SHOOTING BY YOUR BOYS MOST ACCURATE RESULTING IN DESTROYING NUMNER OF ENEMY TANKS AND BLUNTING HIS ATTACK (.) PLEASE CONVEY MU APPRECIATION AND THAT OF MY TROOPS TO PILOTS (.) CONGRATULATIONS ON EXCELLENT PERFORMANCE (.)//

When the enemy was busy attacking other airfields In the Western Sector JAISALMER lay waiting for the second night with its Air Defence elements on the highest alert. 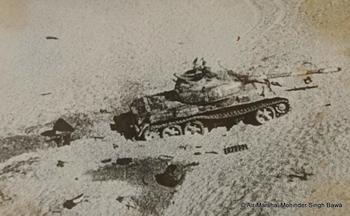 6 Dec 71 — At about 0130 hrs the Div Cdr informed the Base Cdr, that "Since you are hurting the enemy most and if he has a determined Cdr, It is likely that he attempt a thrust with a Sqn of tanks to neutralise the air field”. He apprised the Base Cdr the route enemy was likely to follow and said that this was his personal appreciation and expressed his inability to offer anything to counter this thrust. The Base Cdr coolly inquired as to "What would you like me to do?' On this he advised the Base Cdr to keep some listening posts to hear the noise of advancing tanks, if any. To which the Base Cdr quickly retorted" "What do you expect me to do next and surely you do not want me to quit." However the morale of the Station was high and the Base Cdr was not one bit perturbed about this imaginary armour threat. - The Anti Aircraft Guns were asked to standby for any short notice deployment for countering the armour threat, if at all it developed at night.

The much awaited BOMBER RAID at night was reported heading towards JAISALMER by Army at about 0440 hrs. Since the guns were already free and on high alert, the Base Cdr just stood at CAP controller position standing by to give orders for the guns to fire. On hearing the noise of the approaching aircraft engine's (piston) the guns were ordered to open fire.

The aircraft made a hasty retreat by putting on a sharp bank and off-loading all its weapon load of BOMBS (31 In number) just outside the perimeter. One of the Bombs hit the under-ground power cable and a telephone pole, thus disrupting the much needed telephone communication and
main power generations. The station had to revert to stand-by power supply, and cope with no telephone facility for the next six hours.

The Base Cdr ordered the first light TAC-R on all routes leading into JAISALMER to dispel any doubt of the armoured thrust attempting to capture the airfield. These TAC-Rs revealed no sign of armour and the Comd missions kept in pending, the Base mounted pressure once again at LATJNGLVALA. The tanks were picked up one by one and were hit repeatedly till they started to burn. By the evening nearly 37 tanks lay burning/damaged and scattered In this belt of THAR desert. The battle of IAUNGEWÆALA infact was over. LAUNGEWALA in JAISALMER district of Rajasthan became the biggest graveyard of PAKISTAN Amour. As was expected PAKISTAN met its waterloo. This vas because the Air Force took timely and decisive action before the thrust could assume menacing proportion. Emboldened by their experience of 1965 War, Pakistan mounted one of its biggest offensives on our positions at LAUNGEWALA with a fleet of about 45 tanks. With such a massive striking power at their disposal PAKISTANI's thought that they would get an easy walkover to the GOLDEN CITY OF JAISALMER. The victory here could help PAKISTAN to shield its setbacks on other fronts. The Battle of LAUNGEWALA villiage thus be remembered, not only by our people for the victory achieved by our AIR FORCE but also by the PAKISTANI ARMOUR for the defeat suffered by them in this THAR desert out-post.

7 Dec 71 - A message was received from the Army at about 0420 hrs about the approaching Low level Bomber Raid. The Base Cdr. once again ordered the(SOP) to engage the aircraft, but the' aircraft managed to slip through the barrage of fire at very low height flying along the taxi-track. This raid caused a minor damage to the taxi-track which vas quickly repaired the next day. The gunners claimed that they had hit the aircraft but no signs of wreckage were spotted either from the ground or air. The kill vas not granted to the gunners.

During the day the Base launched 20 Hunter sorties , pounding the area between LAUNGEWALA, BP 638 and GHABBAR, depriving the enemy of its much needed vehicles and guns which lay burning. These facilitated our pilots in navigating to the area. During the first mission of the day and very first mission of Wing Commander CONQUEST OC 122 Sqn from jAISALMER, while engaging the enemy tank he sustained bullet Injury on his foot from one of the small arms fired by the enemy. He safely brought the aircraft to Base. He was immediately evacuated to and the injury declared as minor.

At about 1900 hrs. the MUJAHID movement was suspected behind the Bomb dumps. Due to darkness no visual contact could be made, however foot noises were heard and on this the Ground Defence opened up. The firing lasted for about 5 minutes, the MUJAHIDs hastily withdrew leaving behind two dead camels

28 vehicles and one oil tanker.

8 Dec 71 - The Station launched a total of I4 sorties in pursuit of its aim to destroy the enemy.

At about midday a flash message from the Chief of the Air Staff received. The message and the reply by the Base Cdr is reproduced below : —

FOR OC FROM CAS (.) PLEASE CONVEY MY CONGRATULATIONS AND THANKS TO OFFICERS AND MEN OF 122 SQN (OTU) FOR THEIR MAGNIFICENT PERFORMANCE YESTERDAY WHEN THEY VIRTUALLY WIPED OUT A REGIMENT OF T-59 TANKS NEAR LAUNGEWALA (.) THE DEFENCE MINISTER CMA THE ARMY CHIEF AND GENERAL BEWOOR ALL JOIN ME IN CONVEYING THEM OUR BEST WISHES FOR CONTINUED SUCCESS (.) //////

Since the force was supplemented with additional aircraft from JAMNAGAR raising the total force to 14 Hunter aircraft, the Base Cdr found the inadequate utilisation of this force and flashed a message to TAC Comdr 7 TAC Gp capt MM. ARORA, the text of the message is reproduced below : 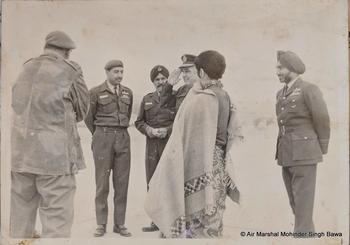 9 Dec 71 — The Station launched a total of 22 Hunter sorties and 2 casualty evacuations by Mi-4.

TO OC FROM AOC-IN-C. (.) THE ARMY CDR SOUTHERN COMMAND TELEPHONED ME TO CONVEY HIS THANKS FOR THE EXCELLENT WORK DONE BY OUR PILOTS IN RAJASTHAN SECTOR (.) I AM HAPPY TO NOTE THE AGGRESSIVE SPIRIT WITH WHICH THEY HAVE CARRIED OUT THE ATTACKS AGAINST THE ENEMY ARMOUR AND LINES OF COMMUNICATION (.) PLEASE CONVEY MY APPRECIATION TO ALL SQUADRONS WHO PARTICIPATED IN THESE STRIKES (.)////

The MUJAHIDS in their attempt to neutralise the targets at the AIRFIELD tried to sneak In from the NORTH WESTERN side. They met again with hot reception of bullets and made a hasty retreat again leaving behind two dead Camels.