After the disappointing performance of the missile in the 65 War, No.28 Squadron tested the K-13 missile in live firing exercises.  A Canberra flown by Squadron Leader S A Patwardhan  was the key in these tests.

After my Canberra conversion I was posted to Pune to join No 35 Sqn in March 1966. While my ops training was going on, one day the flight commander called me and told me to go and see the CO (Wg Cdr Vohra). Getting a call from the CO can always give butterflies in any one's stomach!! Any way there was no escaping from the meeting. When I walked into the CO's office I was in for a pleasant surprise. The Boss told me that I have to go to AF station, Jamnagar with a Canberra B(I)58 for some armament trials. He had NO idea about the nature of the trials or how long would be the duration. So he told me to be ready for 4/5 days stay!! Tango Rama (Flying Officer Ramachandran) was to be my navigator. Next day (16 Dec 1966) self and Rama got airborne early in the morning in Canberra B-58 (IF-931) for Jamnagar. On landing there, we saw four gleaming Mig 21s on the tarmac and we were asked to park next to them. Little did we knew that our armament trials were going to be with them!!

MIG-21s The Mig 21-F were inducted into the IAF just before the 65 War with Pakistan and they were hardly used in that conflict. The initial aircrafts did not have any guns; they only had K-13 infrared missiles. The Mig guys were all top guns from the fighter force. They were being led by Wg Cdr Mally Wollen, one of the first seven Indian pilots those were sent to Russia for training . Number two was Sqn Ldr H S Gill, followed by Flt Lt Nadkarni and Flt Lt Kapila. Well, Wollen, Nadkarni and Kapila all three of them retired from IAF as highly decorated Air Marshals. We lost Sqn Ldr Gill in 71 war while he was commanding a fighter Sqn in the western sector. The elite from the fighter force was there and self and Rama were the 'Chunnu munnu's from Canberra fleet. We got to know that the Mig 21s were to test fire their infrared (heat seeking) missiles and we 'the Canberra' were to provide that heat seeking target. I do not know if these were a new type of missile or the same old K-13 missile. This was the first time ever such a test was going to be carried out in India.

Briefing and Plan of Action

It was decided to use the long stretch of coast line between Dwarka and Porbander for this exercise. Our Canberra was to fly from Dwarka to Porbander and the MIGs were to fly from Porbander to Dwarka. The Canberra was to climb to 48,000 feet and the MiGs would be at 40,000 feet. They were to fly in a stream with thirty seconds interval. The Canberra was to drop a 250 lb 'Flair' (burning Candle) at that height. The Flair has a parachute, so after being dropped, the parachute opens up and the very bright candle starts burning and becomes a heat giving source for the MIGs to fire. We were to fly three nautical miles inside the sea so the debris should not fall on the population.

After this briefing we carried out rehearsals on 17th and 18th December. Every thing worked out well. A Canberra climbing to 48 thousand feet was a long process but for the MIGs to get to 40 thousand was no problem at all !! It was decided to make sure that the lead Mig would only fire it's missile after the Canberra passes over head so that the missile does not sense Canberra as the heat giving source!! Every thing was all set and we got the clearance from Air HQ. 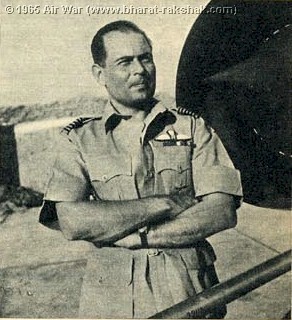 It was to be 20th of Dec for the final shoot out!! That day turned out to be very beautiful and glorious, the WX was absolutely clear with not a spec of cloud in the sky. Self and Rama got air borne in our Canberra much before the MIGs, got to 48,000 ft and set course to Porbander from Dwarka. The Vis was so good that I could see the lead Mig-21, silvery and shining below me as they were not camouflaged at that time. At the right time we let go our flair and lead Mig reported the opening of the parachute of the flair. Then I saw the lead Mig going below me and after few seconds I heard a call from Wg Cdr Wollen saying that he has got the bull's eye. The missile had done a perfect job. I saw the other three MIGs passing below me one after another and then calls of 'Tally Ho' by all of them, gave an indication of successful mission!! When we landed back at Jamnagar, we found the Mig guys waiting for us. Every body was beaming because of the outcome of the trials. We were invited for a drink that evening in the mess with them. So we found ourselves that evening at the bar saying 'Cheers' with them with our Cokes in our hands. The next day we got back to our base.

Today when I ponder over the whole thing, I wonder over the progress we, INDIA has made in this sphere in the last 46 years. From Dec 1966, when we fired first guided missiles to this date, when have had a shot at the Moon and soon we are thinking of hitting the planet Mars. This progress is just awesome!! Any way I am glad that there was a 'CANBERRA' at the start of this journey and we were there to participate in that as the crew. I am sure all the Canberra guys would be happy and proud of this.