The Nawanagar Sword of Honour was a gem-encrusted invaluable sword that was awarded to the newly commissioned Pilot Officers who stood first in their course at the Air Force Academy. The sword was replaced by the Chief of Air Staff Sword of Honour in the 1990s and it disappeared in the sands of time... till one diligent commandant of the Air Force Academy decided to track it down.  The award of the Sword of Honour to the newly commissioned officer who topped his course is a regular feature of the Passing Out Parade.

On taking over as Commandant, Air Force Academy in June 2000, one of the first things I noticed in the well-appointed office was a large elephant tusk adorning a glass protected display case, along with a few other decorative pieces. I recalled my last visit to the same office in late 1983 when I was detailed to carry out a Court of Inquiry into an aircraft accident at AFA. I remember having admired a beautiful gem-encrusted sword in the same glass case. I was told by the then Commandant, AVM CV Parker, that this sword had been gifted to the Academy by the Jamsaheb of Jamnagar in appreciation of the stellar role played by the IAF during the Indo-Pak war of 1971 and that it was extremely valuable due to the large number of gemstones on its hilt and scabbard.

So the question that arose in my mind was: What happened to the sword? My immediate predecessor, AVM JS Sisodia could throw no light on the matter as he had never even heard of the sword.

Over the next few weeks, I learnt that the sword used to be taken out of its armoured glass case, which was further protected by a collapsible steel cage, at the end of each course and used as a rolling trophy, being awarded to the Flying Officer who had come first overall in his course. In fact, the story goes that the area in front of the saluting dais was lined with a dark blue velvet cloth so that any precious stones dislodged from the sword while handing it over by the Reviewing Officer (RO) to the winner would be easy to spot and recover. I understand that immediately after the parade a specially selected team of trusted personnel would go over every square inch of the velvet to locate missing stones. 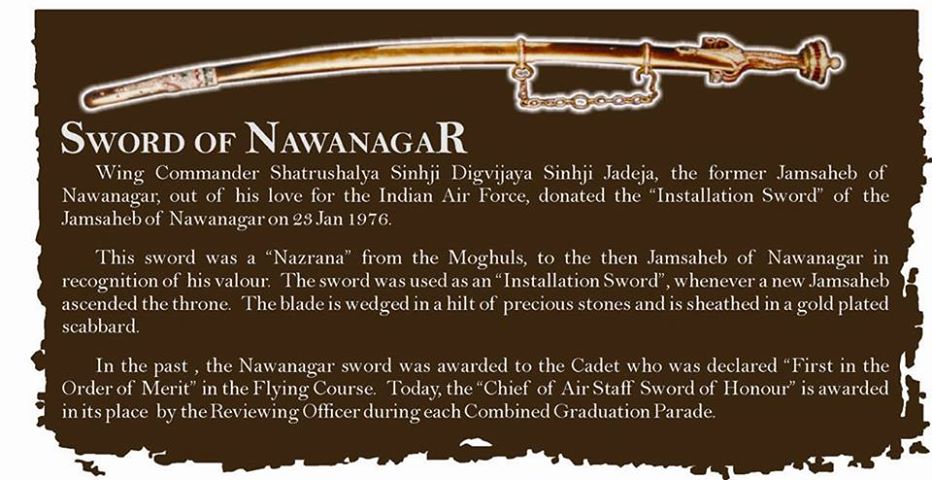 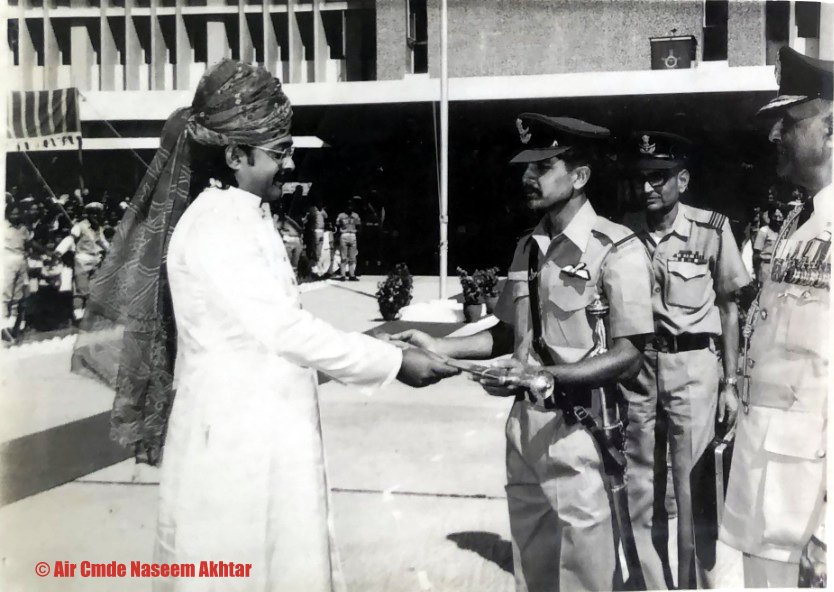 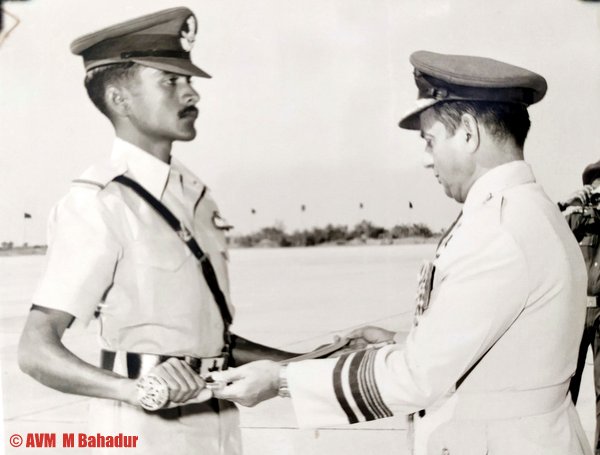 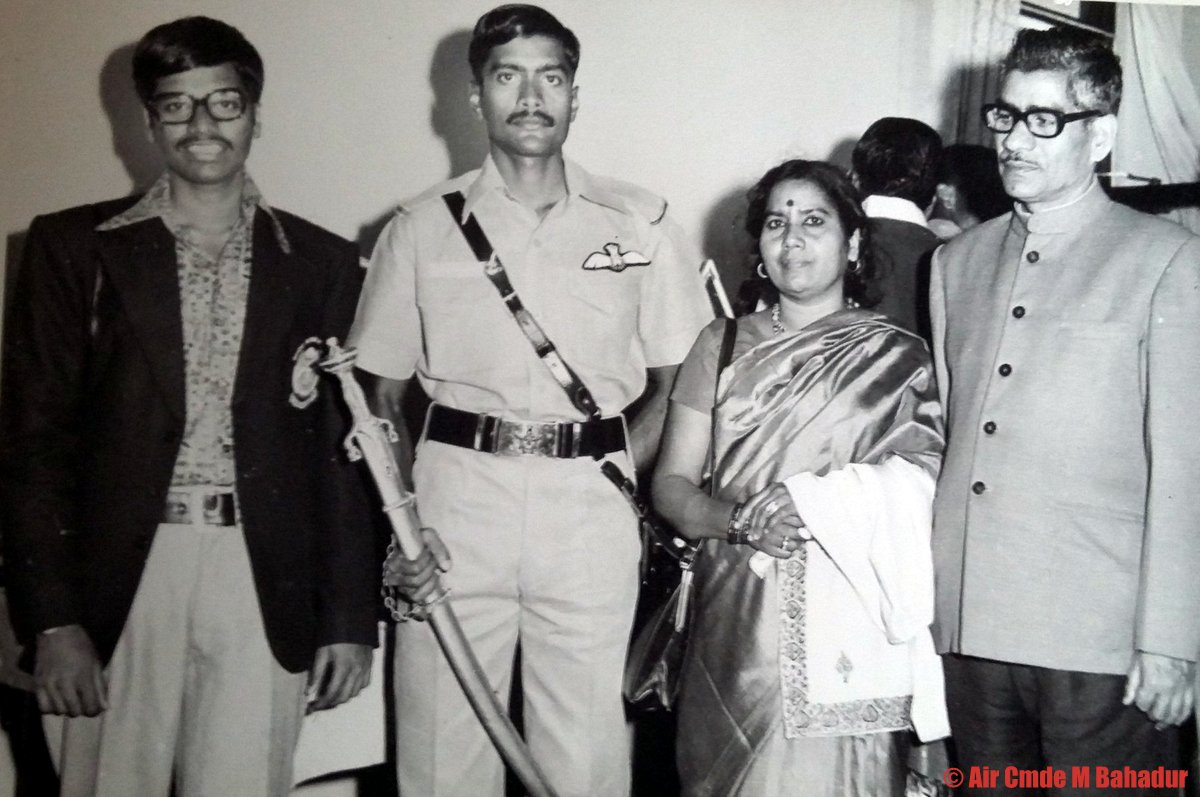 A clear view of the Sword as held by M Bahadur (with his parents and brother).

However, no one at the Academy was able to provide a firm answer to my question about its present whereabouts.

The first ‘breakthrough‘ came during the next Combined Graduation Parade (CGP) when I happened to mention it to Air Chief Marshal DA LaFontaine, former CAS, who was a regular attendee at every CGP. He recalled a CGP during the early 90’s when the then CAS, ACM Nirmal Suri, was the RO and directed that the sword had historical importance to the IAF and should be exhibited at the fledgling Air Force Museum at Palam. To meet the need of a rolling trophy the Jamsaheb’s sword was replaced by a less valuable brass and steel replica; this is the trophy awarded to date as the CAS Sword of Honour. ACM LaFontaine told me that he had been upset by this switch of swords and that he had written to the CAS in strong terms that the trophy should not have been removed from AFA as it was a part of the Academy’s tradition. To the best of his recollection there was no response from the CAS.

On my next TD to Delhi, I visited the AF Museum where the O i/c told me that there was no such artefact on display. I took the opportunity to walk around the museum and kept making enquiries from other personnel posted at the museum. Then lady luck smiled as one of the people I spoke to was a civilian employee who had worked at the AF Museum for a fairly long period. He said that a sword had come to the museum about 10 years earlier but had been returned to “some unit” in Hyderabad area within weeks of its receipt. This was a good clue and on returning I immediately called up Commandant CAW, AOC Hakimpet and Station Cdr Begumpet to try to locate the sword at their stations. But all reported ‘no joy’. The invaluable Jamsaheb’s sword seemed to have disappeared into thin air!

Even as I got busy with the daily chores associated with administering the Academy, receiving visitors, coordinating the CGP and so many other activities, the missing sword was always at the back of my mind.

Several months passed before the next breakthrough, which was as serendipitous as the earlier ones. On a visit to the AFA armoury I spotted a wall safe with an unusual shape built into the wall of the room where small arms are kept.; it had a 4 ft wide door and was barely a 16-18” in height. On questioning the airman on duty told me that it was made specially for the safe custody of the “CGP Sword”. Aha! I thought to myself, the elusive sword was obviously lying right beneath our noses, forgotten but safe.

But on opening the safe we found it to be empty. I noticed that its dimensions were almost identical to the glass case in my office. Then the airman made another remark that made me take notice – he said that he had been attached to Hakimpet a few months earlier and there was a similar safe in the armoury there, however, he had never seen it open so couldn’t say what it contained.

Armed with this information, I once again requested AOC Hakimpet, Air Cmde VK (Charlie) Verma, to look for the sword but this time specifically inside the safe in the armoury at Hakimpet. Within the hour he called back to say the safe indeed contained a brown paper package which was long and narrow, and could well contain the missing sword. I felt like jumping with joy and yelling EUREKA!

I wanted to immediately fly a Kiran to Hakimpet to recover the treasured sword. But in order to avoid problems at a later point in time, the AOC and I agreed that from that point onwards it would be best to follow the appropriate procedures and documentation. Accordingly, a Board Of Officers (BOO) was convened, with two officers each from AFA and Hakimpet. The Terms of Reference included joint opening of the package, photographing the contents and having it evaluated by a government certified agency.

To cut a long story short, the packet was found to contain the sword, safely inside its scabbard, with not a stone out of place. The Govt Approved Evaluator assessed the intrinsic value of the artefacts at Rs One Crore and stated that its worth as an antiquity was ‘invaluable’.

The subsequent reconstructed ‘Action Replay’ seemed to indicate that on receiving the orders of the CAS, the sword had been hurriedly wrapped up and placed on the aircraft taking the CAS back to Delhi, with instructions for it to be placed on display at the AF Museum. Later, on orders to return the sword to AFA, the museum staff placed it on the first transport aircraft headed for ‘Hyderabad area’. But it turned out that the flight was headed for Hakimpet, not AFA. Apparently, there was no paperwork done at either end and had anybody decided to make away with the sword no one would have been the wiser! Having received the parcel from the museum, doubtless at an unearthly hour, the Duty Officer at Hakimpet was probably told to place the sword at the armoury for safekeeping and, as with so many other wonderful missing pieces of IAF equipment, it was soon forgotten. Incidentally, the uniquely shaped wall safe at both places was meant to hold this very sword as in the early years of the Academy’s existence the passing out parades were held at Hakimpet, the first passing out parade at AFA was held in 1975.

There was another minor hiccup when the AOC Hakimpet (quite rightly) insisted on clearance from HQ Training Command to transfer the valuable asset to AFA. Time was running out as I was expecting my posting any day, so I took a short cut to the top with a quick telephone call to Air Marshal TJ Master, AOC-in-C Training Command. He immediately agreed that the sword must be returned to AFA without delay. The written orders for this came within a few days.

Finally, on 20 May 2002, almost two years after starting the quest to locate and restore the Jamsaheb’s sword to AFA, and just hours before I left on posting to WAC, the sword was brought back to the Academy by Air Cmde Verma personally in a helicopter (coincidentally, by then he had been designated to be my successor at AFA). The beautiful sword, with its hilt and the scabbard encrusted with diamonds, emeralds, rubies and other precious stones was photographed from each and every angle before being ceremoniously put back into its rightful home in the office of the Commandant, AFA, where it lies in its splendid glittering glory now.

Thanks to Mahesh Sharma for the image of Nawanagar Sword