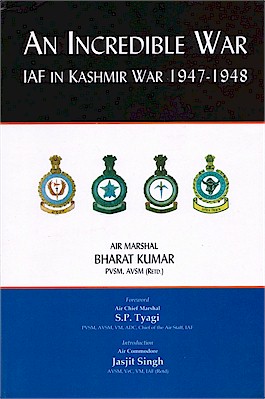 I must commence by saying that anyone interested in the IAF should go out and purchase this book, as it is packed with information. For the first time all the little bits of info concerning the 1947-8 airwar have been brought together to make a well presented and long overdue edition.

The author has gained some excellent access to IAF documents and includes in the text several detailed accounts from operational record books and from veteran’s recollections. I was particularly interested in learning about the bombing operations of the Dakota and I was captivated by the author’s efforts to paint the hostile operating environment in which the IAF had to operate

Photo coverage of all the main players is included, along with useful source notes at the end of each chapter. For the researcher the wealth of information is also conveniently cross-referred by squadron (chapter 8) and by the numerous brave individuals that took part (chapter 7).

From a personal standpoint I like books that include some serial number information as researchers can make use of this, however the author has decided not to include this, which is a shame and a lost opportunity as perhaps he could have used the information to discredit the Pakistani claim of 100 Dakota aircraft being operational during the war.

The actions of British Officers in India compared to those of their counterparts in Pakistan, keep on popping up throughout the text. Perhaps in hindsight the author could have spent some time researching this subject to ascertain the reasons behind their attitudes at the time.

Also I would have been interested to learn about the feelings of the many Anglo-Indians flying with the IAF at that time. For example did they have the same attitude and ideals as those of their senior British Commanders?

I find that much of the author's analysis in chapter 6 to be repetition of what has proceeded in previous chapters and unfortunately what goes onto appear in chapters 7 through 9.

However I must say that the above are minor criticisms of a well researched book from the Indian perspective that contains a wealth of information, much of which is new. For years we have had very little in the way of historical books on Indian Military Aviation, now we are getting several a year and long may this continue. Recommended.