An Artist's impression of a Defiant TT Mk1 in SEAC Colors. This particular aircraft AA591 served with No.22 Anti Aircraft Co-Operation Unit, being allocated to 'B' Flight at Alipore in May 1944. It served for just over an year, flying in the east, including a temporary detachment at Tezgaon. The aircraft was finally struck off charge on 12th June 1945, due to unsatisfactory serviceability caused by lack of spares and usage.

Typical of the aircraft in the SEAC, the aircraft is clearly distinguished from its European counterparts by the large chin mounted Volkes Air Filter .  This drawing is taken from the excellent monograph on the aircraft from the Warpaint Series. The original source of the drawing was a photograph showing the aircraft at Tezgaon.  Drawing Courtesy : Richard J Caruana / www.warpaint-books.com

The Boulton-Paul Defiant was the outcome of the Turret-Fighter concept put forward by the RAF in the 30s. Based on the success of performance of the Hurricane and Spitfire monoplane fighters, the Air Ministry called for a fighter of clean design to be equipped with a power operated turret in the rear, where all the armament would be concentrated in. Despite the weight limitations of the turret, the fighter will have comparable performance characteristics of the latest monoplane fighters.

The accepted fighter in this specification was the Boulton-Paul Defiant. The Boulton and Paul Aircraft Company designed and flew the first prototype K8310  on 11th Aug 1937. The first production Aircraft, the Mk1 powered by the 1,030hp Rolls Royce Merlin III engine,  entered RAF AEE trials in 1939.

Squadron induction followed and the type saw action during the Dunkirk evacuation and the Battle of Britain. It was not a successful day fighter and its role was soon relegated to that of a Night fighter in the latter days of 1940. In this role it carried the Airborne Interception radar AI Mk IV, which had a maximum detection range of four miles. The Defiant Mk.II followed after installation of a new 1,260hp Merlin XX engine, which gave it more power and better top speed performance.

After Beaufighters took over the role of Airborne Interception, the Defiant II got a new lease of life as a High Speed Gunnery Trainer.  The Turret was removed and the rear fuselage modified with a  Target stowage box fitted underneath and the fixing of the target towing equipment. A wind driven winch was placed on the starboard side, and a simple canopy now covered the winch operator, who sat in the place of the earlier air gunner.

This Mk.II based aircraft was re-designated the TT.Mk I (TT.1), and about a 140 of these were built. A number of the older Merlin III powered Mk1s were converted to Target Tug configuration and were redesignated as TT. Mk III aircraft. The last of the TT.Is were delivered in March 43.

Many sources mention that the Defiant flew with the Indian Air Force during the Second World War, primarily with some of the Anti Aircraft Training Units.  Pushpindar Singh's "Aircraft of the Indian Air Force 1933-1973" mentions that the Anti-Aircraft units at Karachi received a small number of the Target Tug Defiants in 1944.   Surprisingly , there are no photographs that have appeared till date in any of the Indian Air Force publications. Nor are there any details on Indian pilots who flew them, or have any experiences of such pilots been recorded.

Out of this paucity of information, a common myth that has been developed over the years is that the IAF operated the turret equipped Defiant. Not helped by a painting made on the Golden Jubilee Anniversary of a Defiant in the IAF, sporting the post 1947 roundels, and with the serial number K8310 (which belonged to the prototype!). And ofcourse, the Defiant pictured in the painting is the fighter version Mk.1, with a rear airgunners turret in place.

The actual truth is that pilots of the Indian Air Force flew the Defiant Target Tug Mk.I or the Mk.III during their service with the No.22 Anti-Aircraft Co-Operation Unit (No.22 AACU). The type also equipped No.1 Air Gunnery School (India) (AGS) in Bhopal.   No.22 AACU was a unit of the Indian Air Force.  No.22 AACU, IAF  was formed at Drigh Road on 3 Dec 42 by merging 1 AACU, 2 AACF and 3 AACFs  that belonged to the IAF.   No.1 AGS was a unit of the RAF created to help provide gunnery training to freshly trained Indian Air Force pilots and gunners.

The second unit to fly the Defiant Target Tugs was No.22 AACU located at Drigh Road, and later at Ambala. It was involved in training the various Anti-Aircraft Batteries around the subcontinent.

No.22 AACU  had operated Lysanders and Wapitis in its earlier days, and also had Hurricanes and Vultee Vengeances at one point of time. It was a very large unit and consisted of many flights that were spread out around the Indian Sub-Continent.  Throughout 1942 and most part of 1943, the majority of the pilots with No.22 AACU were Indian. Posted in fresh from the SFTS or from the OTU, the pilots gained valuable experience flying a myraid of types. Starting with Wapities, they moved onto advanced aircraft including the Fairey Battle and the Brewster Buffalo.

Towards the end of 1943, with many IAF Squadrons becoming operational and heading for the Burma front, No.22 AACU started posting out its Indian pilots out, replacing them with RAF aircrew - including many Seargent Pilots.  While the Unit still had a few Indian pilots on strength, the buik of the pilots were now British. The ground crew and the  winch operators, however were predominently Indian.

No.22 AACU had received as many as 55 Defiant TT.1s in late 1943.   A few Indian pilots on strength of No.22 AACU flew the Defiant during this time. The Unit was commanded by Wg Cdr H J Fish RAF at that time. 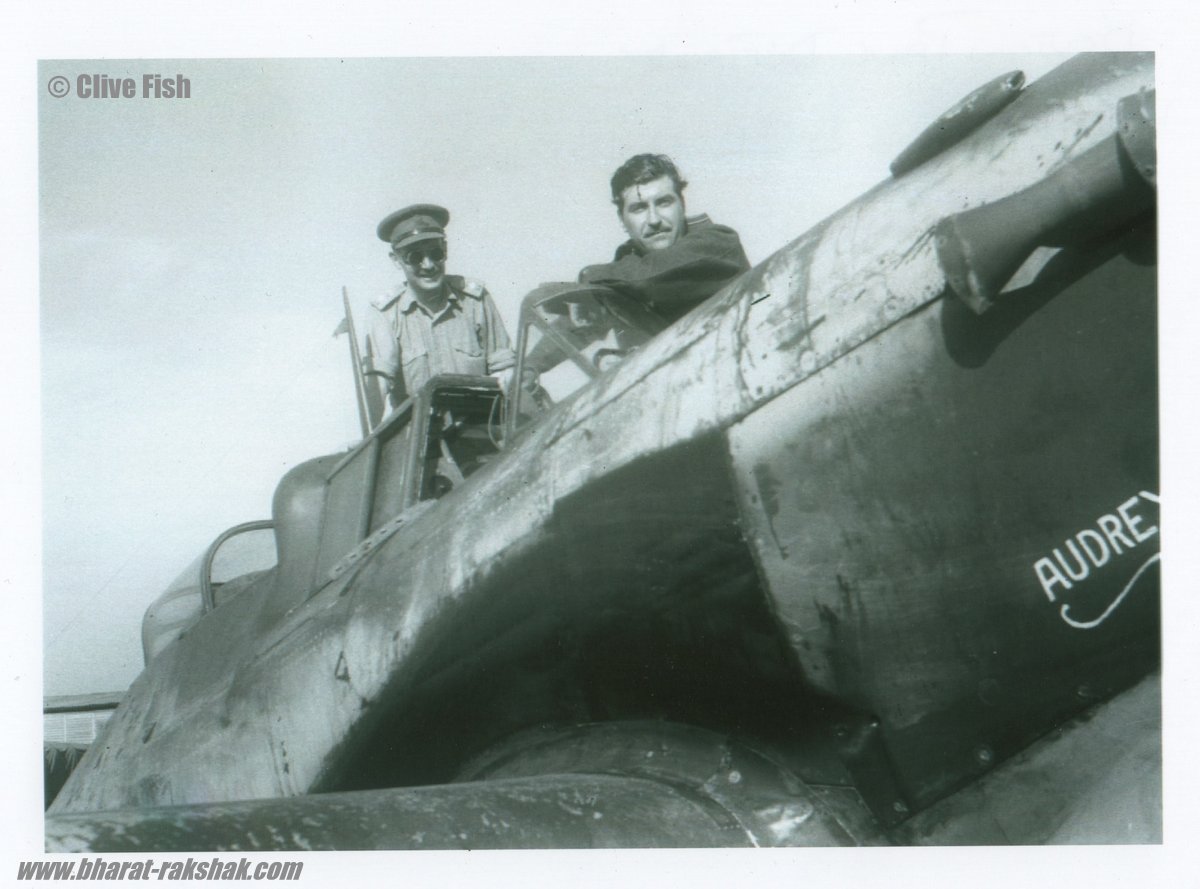 A target tug Defiant (Identity unknown) - with the CO of No.22 AACU, Wg Cdr H J Fish (right).  The backstory of the "Audrey"label is unknown.  But the photograph was taken at Kharagpur. Lt Col Pritchard of the Army is on the left.  Photo Courtesy : Clive Fish.

The serial numbers of the aircraft and the dates they were struck off are given below.

There were several accidents involving the aircraft.  One of the last of these occurred on 30th June 45, when Defiant  AA398 was wrecked at Ambala during a take off accident. The last ever recorded Defiant accident in history - happened on 30th November 1945 at Visakahapatnam - when Defiant AA408 had to be belly landed due to hydraulic failure that prevented the undercarriage from being lowered.

The last Defant was struck off charge sometime towards the end of January 1946, bringing to an end its career in both the IAF as well as the RAF.

One photo is from the collection of Mr. Andrew Thomas which is reproduced here, showing DS155 of No.22 AACU in Karachi, that shows the CO Sqn Ldr Young flying an example. Another photograph of Defiant AA591 can also be seen here.

Boulton-Paul Defiant TT.1 DS155 started its career in India with No.22 AACU in Karachi. Seen here being flown by Sqn Ldr W Young, RAF.  The aircraft  sports unusually larger roundels. These may have been modified from an earlier non-SEAC scheme.  Photo Courtesy : Andrew Thomas, UK

The No.1 Air Gunners School at Bairagarh, Bhopal undertook training for Wireless Operator / Air Gunners of the IAF. The WOp/AGs were required to equip the Vultee Vengeance Units being operated by the IAF at that time. The unit was formed on 13th May 1943, out of the holdings of the previous unit No.1 Armament Training Unit (Which was in turn raised at Peshawar on 18 February 1942 and moved to Bairagarh in June 1942). The AGS at the time of its raising had Audaxes for towing targets. Most units that came for gunnery training bought in their own aircraft. The unit was mainly staffed by RAF Officers and airmen, with the odd sprinkling of IAF officers doing administrative duties.

No.1 AGS was sanctioned the following aircraft on its establishment at the time of its raising:

In practice however, the AGS had Harts, Lysanders and a few Vengeances. The first Defiant did not arrive until February 1944 when Defiant AA371 was delivered to the School from No.320 MU in Karachi. Over the subsequent months, the AGS received as many as 11 Defiants, including attrition replacements. One aircraft, AA470 was written off in a crash landing at Bairagarh on 1 May 1944.

The Defiant served for about ten months before they were replaced by Hurricanes, Vengeances and Harvards. Six of them were dispatched to 18 Care and Maintenance Unit on 11 October 1944 for scrapping. Another one followed in November. By December all Defiants with the AGS have been retired.

Acknowledgements:  This article was prompted by the discussion thread - "Boulton Paul Defiant - Indian Air Force" on the KeyPublishing Flypast Forum  at http://forum.keypublishing.co.uk/showthread.php?t=39646.  Peter Arnold and Geoff "Von Perthes" contributions kickstarted the discussion. Thanks to Herkiran Toor for his help in tracing photographs. Special Thanks to Historian Andrew Thomas for information on No.22 AACU and the Photograph of the Defiant DS155.
Warpaint Books for the profile of the Defiant in SEAC Colors. Chris Fish for the Photo of Wg Cdr H J Fish.