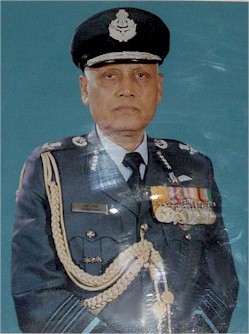 Air Chief Marshal Shashindra Pal Tyagi took over as the 20th Chief of Air Staff of the Indian Air Force from 31 December 2004. Popularly known as "Bundle", Tyagi was born at Indore on March 14, 1945 . He is an alumnus of St Xavier School in Jaipur. He was commissioned in the IAF on 31st December 1963 in the fighter stream.

The initial years of his career in the air force, Tyagi flew Gnats with No.23 Squadron and later served with Hunters of No.27 Squadron. A veteran of both the 1965 and the 1971 Wars, he was one of the pioneer batch of eight pilots selected for conversion on the Jaguar Interdiction aircraft when it was inducted in 1980s. Whilst training at Lossiemouth, he was one of the two Indian pilots chosen for a Photo Recce Course at Coltishall with No.41 Squadron RAF.

Tyagi commanded No.14 Squadron "Bulls" later after coming back to India. A Graduate of the TACDE with a Fighter Combat Leader and Pilot Attack Instructor qualifications, he had also attended the Junior Commanders Course, the National Defence College and finally the Defence Services Staff College at Wellington. He received the Vayu Sena Medal (VM) for distinguished service in 1985.

In his mid career, Tyagi had several other appointments under his belt. He was an instructor at TACDE. As an Air Commodore, Tyagi commanded 33 Wing at Jamnagar. Later he was also posted as the Defence Attache at the Indian Consulate in Saudi Arabia. Air Commodore Tyagi was awarded the Ati Vishist Seva Medal (AVSM) in 1994.

He also held the appointments of Director Operations (Air Defence), ACAS (Intelligence), ACAS (Ops). He has had a stint as a senior fellow at the IDSA and was also a senior Instructor and Directing Staff at the DSSC Wellington.

Air Marshal Tyagi was awarded the Param Vishist Seva Medal (PVSM) in 2003, and was appointed as one of the Honarary ADCs of the President of India.

Air Chief Marshal SP Tyagi is married to Mrs. Vandana Tyagi and has one son and a daughter. He retired from the IAF on 31st March 2007.