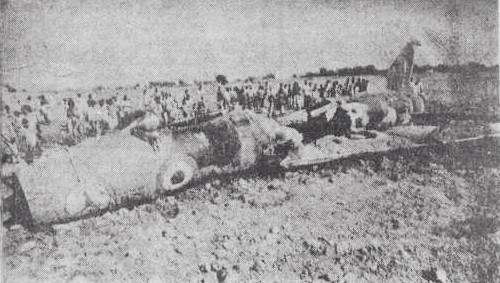 This section of the website is dedicated to the hundreds of pilots and aircrew of the Indian Air Force, Indian Army , Indian Navy and Coast Guard Aviation wings, who have sacrificed their lives in the line of duty , training rigorously in peace time and in exercises, in flying humanitarian and relief missions to their colleagues in the worst of terrain and conditions, and who have remained unacknowledged and unsung, except in the memories of their beloved.

This Aircraft attrition section has its root in my IAF Attrition section that has been hosted on my tripod site and later on the Warbirds of India site years back. I had over the years collected attrition info related to the Indian Air Force in quite some detail, and have built upon with some information on other air forces as well.

The data for the pre-1947 crashes has been built from several sources.

Operational losses are taken from the Official History of the Royal Indian Air Force 1933-45 (Ed by SN Gupta , pub by MoD India) but the names could only be confirmed after referring to the Commonwealth War Graves Commission Web Site at www.cwgc.org .

The losses of training and non-combat units have also been procured by other sources. details of crashes related to 151OTU, 22AACU , AFTS / SFTS, AGS(I) after March 45 can be found in the three books, Final Landings by Colin Cummings , Broken Wings by James J Halley, pub by Air Britain Ltd and Price of Peace by Colin Cummings .

These books do an excellent job in covering ALL losses in the SEAC sector after May 1945 till Aug 47. Including the squadrons and combat flights.
Type Histories are another excellent resource - Spitfire International by Helmut Terbeck and Co, pub by Air Britain Ltd addresses all Spitfire fates in SEAC. The K-File by J J Halley, again published by Air Britain is an excellent source for K serialled aircraft, including the Wapiti, Hart, Audax, Valencia and any other type that served with the IAF.

The Impressment Log (Air Britain) addresses various civvie types that were impressed into the Coastal Defence Flights - it also covers many of the civilian impressed Tigermoths. The Bristol Blenheim History book is a good source on the type. Various RAF Serial Number series , published by Air-Britain, helped fill in details of various losses that cannot be got from the Cummings / Halley book or the ORBs - they cover the J Series (wapitis), L, N, P, R series (Lysanders). the AA-ZZ series which should cover many types as the Hurricane Vengeance etc.

All News reports are collated from PTI, UNI , Reuters India and other News agencies in India. Some of which are: Daily Herald, Tribune India, Express India, Gomantak Times, Daily Excelsior, Rediff News, and Air Forces Monthly.
Additionally Squadron Histories published over the years have been used to build this list.

Additionally Our Thanks go to the following people:

Note: All the data available here is publicly available in the Gazette of India, published by the Indian Government, or from public domain sources, press releases about Awards and Right-To-Information (RTI) Requests. Additionally data shared by veterans is added to the page with permission. No data with respect to serving officers below the rank of AVM is displayed. Information in Gazette of India and Award citations and photographs as released by the Indian Air Force are the only details displayed.
If you have any comments, then please leave a message on the Database Update Form Copyright 2017 Bharat-Rakshak.com. All Rights Reserved. Reproduction in whole or in part in any form or medium without express written permission of BHARAT RAKSHAK is prohibited.