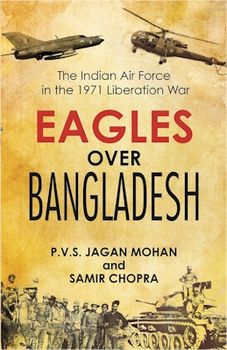 Eight years in the making, this book is the follow up to the well received "India-Pakistan Air War of 1965". The story of the Indian Air Force's operations over Bangladesh during the liberation war, including its role in training and equipping the Mukti Bahini fliers, its air offensive against Dacca and the constant bombardment of the Pakistani Army is narrated in great detail. Drawing on interviews with Indian, Bangladeshi and Pakistani veterans, it tells the story of the air war as never before with exclusive photographs and previously unpublished research.

In December 1971 Bangladesh was born.  Open war broke out on the Western and Eastern fronts in December 1971. The war ended quickly, with the West Pakistani Army surrendering in Dacca two weeks later. A significant factor in facilitating the Indian Army's rapid progress to Dacca was the Indian Air Force(IAF) which proved itself to be a formidable fighting force. Eagles over Bangladesh: The Indian Air Force in the 1971 Bangladesh Liberation War recounts the IAF offensive over Bangladesh, commencing with the raids on Dacca on the first day of the war, and moving on to the final coup de grace delivered on the Governors House in Dacca. It aims to fill in the gaps regarding a military conflict that took place almost four decades ago.

This book narrates the story of the Indian Air Force in the operations over the Eastern Sector. Drawing on interviews with Indian, Bangladeshi and Pakistani veterans, it tells the story of the air war as never before with exclusive photographs and previously unpublished research.

Harper Collins had made available a limited run of Hardbound Editions.  These editions are currently available in the US and in the UK.  Less than 40 HB copies are currently left on the market.

"The author and historian Jagan ,Chopra and Harper Collins are complimented for publishing the definitive account for the Eastern sector operations "

"their latest book is compulsory and therapeutic reading for anybody who loves the armed forces or is interested in national security. It is a remarkably detailed and dispassionate account of IAF operations in the eastern sector in that decisive war." - Shekar Gupta, Indian Express

"A matter of honour indeed, Eagles over Bangladesh is definitely one that should find a place of esteem in your shelf."  - Vyas Sivanand - New Indian Express

"I leafed through the first few pages of Eagles Over Bangladesh and realised there was no point in just reading it. It had to be studied with the seriousness that an outstanding work of history deserves. Outstanding effort and an invaluable contribution to military history. Enjoyed every page." - Vishnu Som, NDTV