The MiG-29 first went into production in the erstwhile USSR in August 1983.

The Indian government signed the contract for procuring the MiG-29 in September 1986.  Deliveries of the aircraft were made by sea and assembled at Pune by the manufacturer in mid 87.  The aircraft was formally inducted into the IAF Service with Nos.28 and 47 Squadrons at a ceremony in Pune on 6th December 1987.

It was decided to raise a third unit on the MiG-29 and a follow up contract was signed in February 1989.  Accordingly the third unit, No.223 Squadron converted to this type in November 89. Total procurements totalled 70 aircraft and 48 spare engines at this stage.

The aircraft of the first two units came without nosewheel guards and these were retrofitted by June 1992.

In 1994,  a further 10 aircraft were ordered, including one trainer. This took the total acquisitions to 80. This last batch of aircraft are said to be the Fulcrum-C version, which allows the interception radar to lock on to two targets simultaneously. These aircraft have the capability of carrying drop tanks under the wings as well. At least two of these single seaters are out of service -  either withdrawn or destroyed due to accidents, thus leaving about seven in service.

Starting in 1996, MiG-29s were sent to 11 Base Repair Depot, Ozhar for major overhauls. Aircraft arriving here were completely stripped to their airframe skeltons, rubberised parts replaced, other parts cleaned and inspected, wiring harness replaced, and engine sent to HAL Koraput for overhaul. The entire aircraft would pass through 13 different stations before emerging as a completely rebuilt aircraft.

In 1999, trials started with the R-73 missile when the Kargil Operations broke out, giving them an opportunity to induct the missile in a live combat scenario (AFM Mar 2009). A MiG-29 detachment from No.223 Squadron took part in the ops flying several escort sorties. On atleast one occasion, the MiG-29s came close to a show down with the enemy when two PAF aircraft were locked on by one of the pilots.

In March 2008, a contract for mid-life upgradation of 63 single seaters was undertaken with RAC-MIG, Russia , for a total value of USD 964 million.  The MLU project will extend the life of the airframes by another 15 years or a 1000 hours.  The new Total Technical Life of the MiG-29s will be 40 years / 3500 hours. The MLU will also involve upgradation of the avionics in the aircraft. The project is scheduled to be completed by March 2014. With the loss of one aircraft in late 2008, the number of fighters scheduled to be upgraded has been revised to 62.

As of 2009, Fourteen aircraft, including atleast one twin-seater have been lost or written off in accidents. 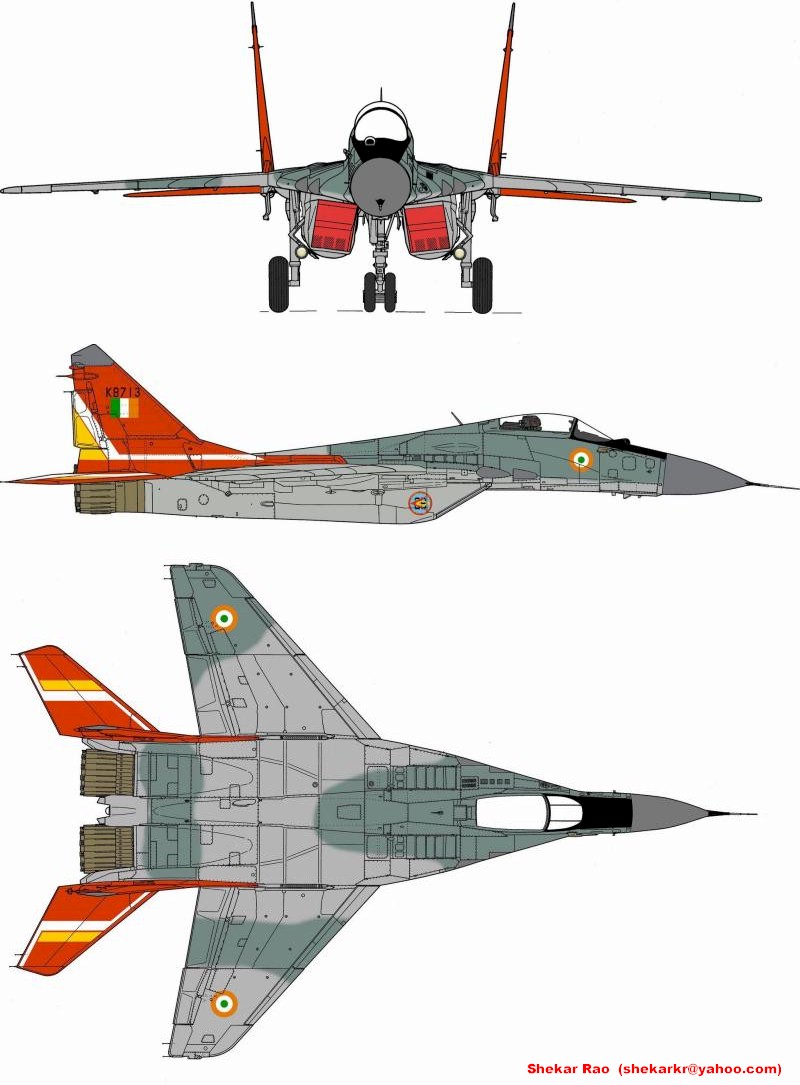